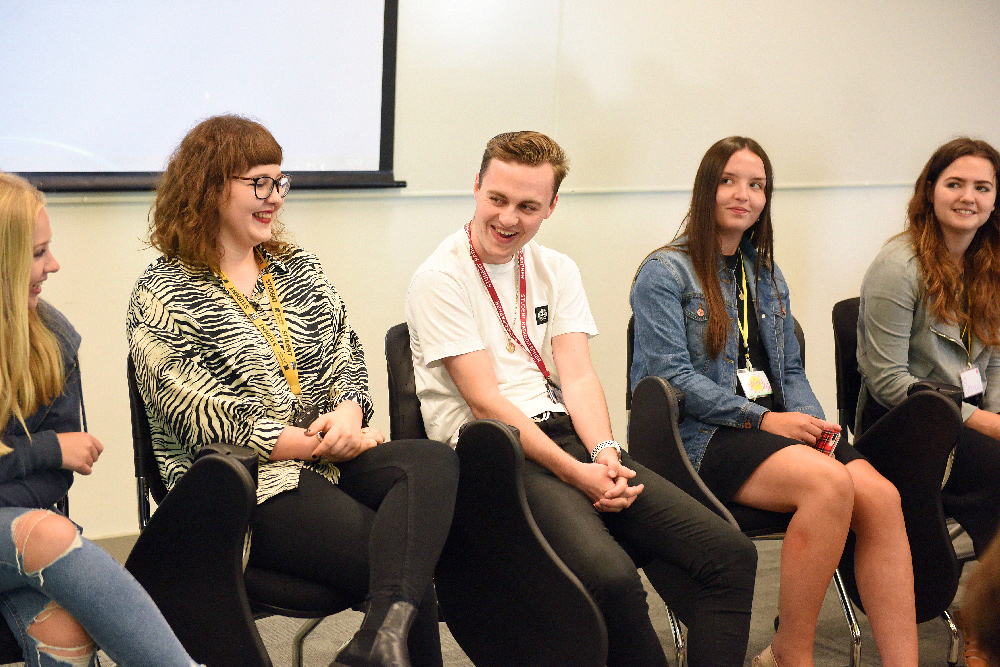 We have various virtual Taster Sessions available covering a range of subjects across our four Academic Schools; School of Engineering, Arts, Science and Technology, School of Health and Sports Sciences, School of Social Sciences and Humanities and the Suffolk Business School. These sessions are available to schools and colleges, and can be arranged at a time to suit you. Most sessions are aimed at students in Years 11-13 (or equivalent), last approximately 60 minutes and will give attendees the chance to experience the subject, as well as ask any questions about the course and the University of Suffolk.

Please see the drop down menus below to view what we have on offer and contact us via schools@uos.ac.uk to book.

Participants will have a go at designing systems that make up the core loop of a game. They'll learn some practical techniques, based on behavioural psychology, that designers use to motivate players. By the end of the session, they will understand more about what game designers do and have a framework to build upon for future game development.

Wildlife, Ecology and Conservation Science: What lurks in our waters?

Water is just H20, right? It is true that almost all of our water is made of hydrogen and oxygen, but there are many other elements and compounds dissolved in water. Some of these are vital for life, such as essential metals, but others are more sinister and can be toxic to our health and the wildlife found in our waters. This lecture will explore where these toxic compounds come from and the effects they may be having. Clean water is vital for a sustainable future.

Architecture: How do architects play with light?

Architecture is one of the most complex and beautiful design disciplines, yet when we look at the finished building, we often see only an arrangement of bricks, mortar and glass. This session explores how architects use light and its relationship to atmosphere, proportions and the built environment. Participants will be working on their own designs, so please have a pencil and some A4 paper at the ready.

This session will introduce the wonders of stem cells and their amazing potential to regenerate our bodies.

In this session, students will learn about the nutritional values of various foods and how they can be categorised. Students will be given a random selection of different types of food packages and the task will be to sort the foods into one of two categories based on their understanding of the food label. Students will also be challenged on how often they read food labels and their understanding of the nutritional value of food.

Childhood: What is 'childhood'?

It’s time to question our ideas of what it means to be a child! This session explores many different sociological and psychological constructions of childhood to try to decide what childhood actually is.

Criminology: Why do some people commit crimes and others do not?

When reading any newspaper, listening to the radio, watching television or even following social media, it is likely that there will be some representation of ‘crime and deviance’; county lines drug dealing, illegal raves, political protests which extend into criminal activity and even breaches of COVID-19 restrictions. Criminologists try to understand why only some people engage in these activities while most conform to mainstream norms and values. This then raises the question of who it is who determines what mainstream norms and values ought to look like and how we reach agreement. Participants in this session will explore and share ideas on some of the many theories which seek to explain crime and deviance.

Netflix’s Stranger Things has been labelled 'unsuitable for children' since its first season. But why, when so many young fans watch the series and children like Eleven have been opening portals to 'topsy-turvy' worlds since Alice's Adventures in Wonderland? This session opens the Gate further to explore horror’s prolific presence in 21st century children’s literature and culture. Why do so many children love horror? Why do so many adults fear the impact horror might have on children? And why do children feature so prominently in a genre that often excludes them as readers and viewers?

English Literature and Language: What is linguistics? Language, Society & Identity

This session will introduce the study of linguistics.

Law & Politics: What can the law do to fight climate change?

A lecture-style session suitable for larger groups which uses video clips of youth activists to frame a discussion around the complexities of international environment law, concluding with some positive outcomes from recent court cases.

Aimed at secondary school students (13+), an 'on-your-feet' exercise to help young people understand the difficulties faced by those living in more challenging circumstances.

What are Human Rights?

A session based on materials created by Amnesty International to introduce primary students (KS2) to the concept of human rights.

Politics: Who voted for Brexit?

Who voted for Brexit and why? Were certain groups of people more likely to vote remain or leave? And can we predict what people think about politics based on their demographic and social profiles? In this interactive session, participants are introduced to the study of electoral behaviour and public opinion through analysing political polling and the EU referendum. Participants are encouraged to draw their own conclusions from public opinion research, as well as reflect on how effective political polling is at understanding voter behaviour.

How do UK general elections work? Why does the number of seats a political party gets in parliament not reflect the number of votes they received? Is it really ‘one person, one vote’? And are there better ways of electing our representatives? In this session, participants are introduced to the mechanics of UK general elections and how the first-past-the-post electoral system affects the way our politics operates. Participants are also encouraged to think about the nature of political representation and the pros and cons of different methods for electing our MPs. This directly relates to content taught on the University of Suffolk's Politics degree under the ‘Politics, Crime and Policy’ module.

Why do we have governments? Why do some people have power over others? Why do we obey those in authority? Where do societies and states come from? In this interactive session, participants are introduced to core ideas in political theory, including human nature, power, authority, the social contract and the state. This directly relates to content taught on the University of Suffolk's Politics degree under the ‘History of Political Thought’ module. This session can also be run face-to-face.

Who do global resources belong to? Where should countries’ territorial limits end? Do more powerful countries have a right to take from less powerful countries? How effective are diplomacy and international organisations in preventing conflict? This interactive session introduces students to the study of international relations and global politics. Participants are tasked with studying diplomatic tensions in the South China Sea in order to identify who the key international players are, what resources are at stake and how effective international diplomacy is at preventing conflict. This directly relates to content taught on the University of Suffolk's Politics degree under the ‘Current Political Disputes’ module.

Sociology: Are things getting better? Worldwide Happiness and Wellbeing

This session will explore how we can subjectively measure happiness and wellbeing. It will outline changes in the objective wellbeing of people across the world in the 21st century. The session is interactive and will allow participants to check their own knowledge of how well we are living.

Sociology: Thinking About Inequality and Prejudice

Accounting and Financial Management: Inside a Corporate Boardroom

How do Directors use accounting and finance to drive business strategy? This session will take a look at what Financial Directors actually do and where a Finance degree could take you!

Business Management: How do businesses get started?

Do you need to be someone 'special' to start your own business? Are entrepreneurs born or made? This session will give participants a sense of what it's like to 'be your own boss'.

In this session, participants will go back stage and behind the scenes to explore the real life challenges of festival management.