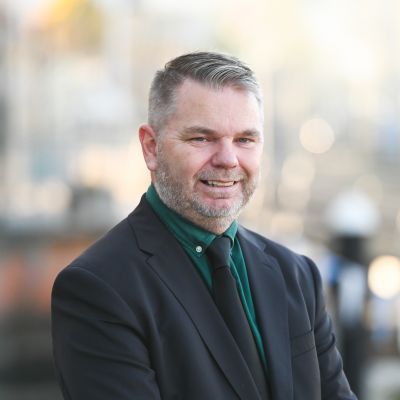 Stuart Agnew is an Associate Professor (Criminology) and has held several roles within University of Suffolk since he joined in 2008 from University of Teesside.  Having previously been an Associate Dean in the School of Social Sciences & Humanities, Course Leader for Criminology provision, and expanding the partnership between the University of Suffolk and Unitas, he has been appointed the Director for the Centre for Academic & International Partnerships.  Stuart has a 1st Class (Hons) degree and MSc Criminology from University of Teesside and is a Fellow of Higher Education Academy and has a PGCE.  Stuart is also an experienced External Examiner.

Stuart has extensive experience in course management, design and validation and delivery at undergraduate and postgraduate level. A case study authored by Stuart and Prof Emma Bond regarding the use technology to support M level students on this programme has been published by The Scottish Higher Education Enhancement Committee as an example of exemplary practice from an international perspective.

Stuart is an experienced External Examiner and has a thorough understanding of HE quality standards.

Video Doorbells and the Perception of Security in Ipswich

The use of technology to enhance learning at post-graduate level

Reviewer for the following publishers since 2010:

Bond, E. Agnew, S. Pippen, A. and Palmer, T. (2014)  The Children’s Workforce across England is ill-equipped to meet the needs of child victims of online abuse Download.

Agnew S. and Bond, E. (2013)  Everyone Deserves a Second Chance - Findings from a qualitative review of the Challenge 4 Change (C4C) Intervention Programme Download.

Bond, E. and Agnew, S. (2013) Exploring student and employer perspectives on creating an online platform for Opportunities in Suffolk

Bond, E. and Agnew, S. (2013) My education: The good the bad and the ugly. A report on the findings from Shout Out Suffolk!

Bond, E. Agnew, S. and James, D. (2013) Shout Out Suffolk! a report on children and young people’s experiences of education in Suffolk

Hallsworth, S. and Agnew, S. (2013) Perceptions and Understandings of Gangs and Gang Life in Birmingham: A report for the West Midlands Police