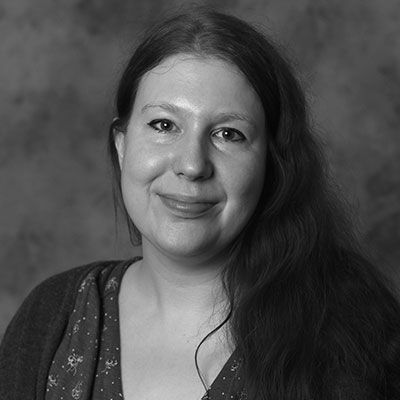 Katherine joined the University of Suffolk in November 2019, shortly after graduating with an MA in Woman and Child Abuse Studies with Distinction from London Metropolitan University. Before returning to academia, Katherine worked in the voluntary sector, where she was employed at a Suffolk-based charity delivering specialist support to women and girls affected by sexual violence. Her experiences working within the VAWG sector and learning about the barriers survivors of gender-based violence can encounter when seeking safety, justice and empowerment – particularly those subject to intersecting forms of marginalisation such as disabled, migrant and/or minoritised women – spurred her to pursue her second Masters.

Her interdisciplinary MA dissertation explored the epistemological impacts of involvement with the Rape Crisis movement. Employing a theoretical framework devised by philosopher Miranda Fricker, Katherine examined how Rape Crisis worker interviewees responded to the analysis of sexual violence as a cause and consequence of gender inequality, evaluating the extent to which Fricker’s concept of hermeneutical injustice ‘fit’ or resonated with participants’ accounts of their epistemic journeys.  Having the opportunity to pursue this qualitative research project – and to reflect, theorise and build upon the insights of the workers who took part – afforded a glimpse into the serendipities and challenges of conducting primary research.

In a former academic life, Katherine studied Philosophy and Literature at the University of East Anglia, graduating with a PhD in 2013. Her thesis investigated the appeal of violent and disturbing narrative art, synthesising theory and findings from analytic philosophy, sociology, psychology and affective neuroscience.  She continues to conduct independent research in philosophy, presenting at conferences and publishing on topics within her areas of interest.

Katherine’s current research interests include gender-based violence, social and applied epistemology (particularly as they relate to sexual and domestic violence and other forms of abuse), feminist philosophy, philosophy of mind and the emotions and the appeal and effects of violent media.

As a research assistant in the Suffolk Institute for Social and Economic Research's Centre for Abuse Research, Katherine supports a range of domestic abuse projects and evaluations.

MA in Philosophy and Literature, University of East Anglia, UK (2007)