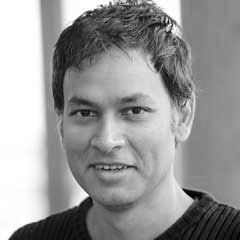 He completed his Phd in 2001 focussing on identity construction and economic restructuring with Turks in Essen and Pakistanis in Greater Manchester. Shamser is currently under contract with his co-author to write a book for Routledge entitled Migrant City based on three years critical ethnographic fieldwork with 30 young migrants to London.

S.Sinha, S.Uppal and A.Pryce, (2008) I had to cry : exploring sexual health with young separated asylum seekers in East London, Diversity in Health and Social Care, 5, 101-111

S.Sinha and L.Back, Of Method and Freedom: How to re-shape the restrictive dynamic between researcher and participant. http://blogs.lse.ac.uk/impactofsocialsciences/2013/10/14/of-method-and-freedom/|, October 14, 2013

L.Back and S. Sinha, Stop Press! You ve got a text from UKBA: Technologies of Control and Connection, Discover Society http://www.discoversociety.org/stop-press-youve-got-a-text-from-ukba-technologies-of-control-and-connection-2/|

L. Back and S.Sinha (2012) Migration and the Terms of Inclusion (ed) K.Fangen Youth,Migration, Exclusion and Belonging in Europe, Palgrave MacMillan, 54-86

L.Back and S.Sinha (2010) The UK: Imperial Spectres, New Migrations and the State of Permanent Emergency in (eds) K.Fangen, A. Mossan and F. Mohn, Inclusionand Exclusion of Young Adult Migrants in Europe: Barriers and Bridges, Surrey, Ashgate, 51-80

S.Sinha (2007) Whoever names you has the powerto tame you: how the language of the begging bowl impoverishes Africa in Zia A (eds) Home Truths: Cultures, leadershipand development from an African perspective, Mombassa and Nairobi, British Council, 17-32 Edited collections in Journal Special Issues

L.Back and S.Sinha (2011) What are the impacts of restrictions on participation in the labour market and civic life on young migrants? (COMPAS) ESRC Centre on Migration, Policy and Society

S.Sinha and L.Back (2011) A door to the future?: the consequences for young migrants of immigration and welfare policy. London, Goldsmiths College

K. Curtis, S. Sinha, A Jayakody, R. Viner and H. Roberts (2005) Contraception and unsafe sex in East London teenagers: protective and risk factors for use of contraception among black and minority ethnic young people in East London, Department of Health and DFES www.dfes.gov.uk/research/data/uploadfiles/rw42b.pdf|