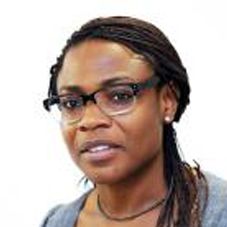 Pere was born in Nigeria and attended the University of Port Harcourt, Nigeria where she obtained a Certificate in Theatre Arts in 1996. In 2001 she obtained a Certificate in Personnel Practice from Suffolk College, and in 2002 commenced a degree course in Early Childhood Studies which culminated in her being awarded a 1st by the University of East Anglia in 2005. Pere then qualified as an NQT in 2006 and in 2014 completed her PhD which critically examines the consumption of overseas schools by the Nigerian privilege classes. Her thesis is framed within the sociology of consumption and draws heavily on Bourdieu's work on Distinction and Fanon's colonisation theory.

Pere is interested in how race and class intersect and influence country and school choice in the transnational education market. She has written a paper, which was commissioned and published by the British council, on the reasons why the Nigerian privilege class send their children to UK based British private boarding schools. She has also presented her preliminary findings in various conferences for example, British Council's conferences in Edinburgh and London.

Pere's areas of expertise are sociology and education. In general, she is interested in inclusion in education and the effects of social class, gender and race on academic achievements and future life trajectories. Having been educated in Nigeria and the UK has provided her with a broader and unique insight into key issues in education beyond England in particular and Europe in general. As a sociologist her areas of interest are in the sociology of education and consumption. She is interested in the idea of consumption being a mechanism for status expression and identity construction. And in relation to education, she is particularly interested in how habitus, field and capital interact to (re)produce privilege and inequality in education and society in general. She is equally interested in understanding how and why concepts such as White and Whiteness are used to construct the ideas of quality and world-class status by private schools in the transnational education market.

Presented a paper on ‘The Nigerian elites’ at the BSA Annual conference at Aston University, Birmingham April 2016

Presented a paper “The (Re)making of the contemporary Nigerian elite child” at the BSA Bourdieu Study Group’s Inaugural Biennial Conference 2016: 'The contemporary relevance of the work of Pierre Bourdieu University of Bristol, July 2016

Presented a paper “Whiteness as a symbol of ‘quality’ education: An analysis of perceptions of quality among affluent and middle class Nigerian parents” at the BSA conference Manchester University, April, 2017