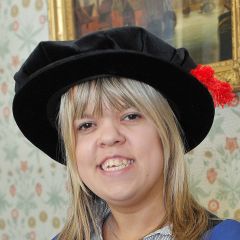 Zoe Newson is a British Powerlifter who won bronze in the under 40 kg class for Great Britain at the 2012 Summer Paralympics in London.

In 2008 she attended her first IPC competition in Cardiff and lifted 47.5kg . In 2009 Zoe was in Cardiff and finished first with 70kg. Zoe lifted 75kg in both British Finals and World Dwarf Games and first places in both competitions.

In 2011 Zoe competed in Cardiff and completed a lift of 82.5kg securing both 1st place in the junior and senior competitions. A year later at the same competition, she lifted 88kg and secured first place, extended her European Junior Record and pushed herself into fifth place in the World.

Previously a student at East Bergholt High School, Zoe has been a member of Suffolk Spartans since it started in 2007.