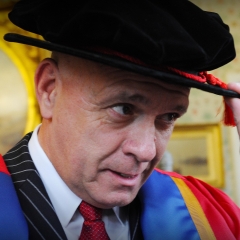 Ipswich-born Terry Baxter has been the Chairman of Ipswich Central Management Ltd since 2013. Ipswich Central is the Business Improvement District (BID) Company for the town centre.

In addition, Terry is the Chief Executive of the Education and Sport Charity Inspire Suffolk, a position he has held for seven years. This independent charity uses sport to engage, motivate and educate young people in the county of Suffolk who are in need.

Terry has a long established relationship with BBC Radio Suffolk starting as a broadcast assistant and reporter in 1991 before progressing to the roles of producer, presenter and football commentator from 1994 until 2001. He subsequently returned to the radio station as the breakfast show presenter in 2011, a position he held for two years.

In the 10 years between his time at the BBC, Terry held the post of Director of Communications at Ipswich Town Football Club.

During his address to students graduating from the Department of Nursing Studies, honorary fellow Terry Baxter said “I would like to add my congratulations to you for all that you have achieved Ipswich and indeed however may I make a plea to you, do not give up on Ipswich. Ipswich and indeed Suffolk needs well qualified, bright, intelligent young people to help continue its journey. It needs people like you to take on plans that are being formulated now and into the future to make them your own. It needs people like you to take on research here, to work here, to create new businesses here, to live here, to play here and to raise your families here. I firmly believe with a real passion that this town and indeed our county are taking huge steps towards a brighter future whether by intent, economic necessity or fear of doing nothing major players in Ipswich and Suffolk are working together with united objectives and this is really a time to be excited about the future of this town, not to give up on it.”