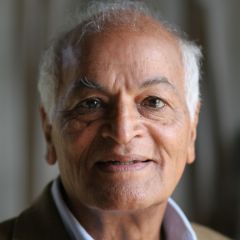 Satish Kumar has been the editor of Resurgence & Ecologist magazine since 1973.  Under his editorship Resurgence has become, according to the Guardian newspaper, “The spiritual and artistic flagship of the green movement”.

When he was only nine years old, Satish Kumar renounced the world and joined the wandering brotherhood of Jain monks. At the age of eighteen, he left the monastic order and became a campaigner for land reform, working to turn Gandhi’s vision of a peaceful world into reality.

Fired by the example of Bertrand Russell, he undertook an 8,000 mile peace pilgrimage, walking without any money, through deserts, mountains, storms and snow to deliver packets of ‘peace tea’ to the leaders of the four nuclear powers.

Satish is the author of five books.  His autobiography, No Destination, first published by Green Books in 1978, has sold over 50,000 copies.