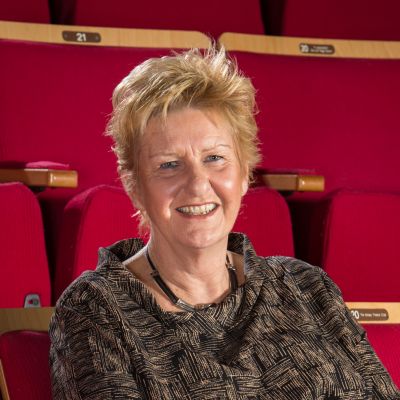 Sarah Holmes began her career in her native New Zealand at Downstage Theatre, Wellington before moving to the UK in 1980 seeking further opportunities in the British theatre industry. She has worked in every aspect of theatre management – as a stage manager, production manager, administrator, head of marketing and general manager – in a career that has taken her from London to North Wales and on tour up and down the country. Since the year 2000 she has been the Chief Executive of the New Wolsey Theatre (NWT) in Ipswich, re-opening the theatre alongside her partner, Peter Rowe, as Artistic Director, and curating a programme combining the highest quality touring and home-grown work in a theatre designed to be appealing and accessible to all.

The NWT has forged close ties with the local community through its extensive youth theatre, young company and creative learning programmes, providing opportunities for young people to develop their own creativity and potential careers in the Arts. The annual “rock ‘n’ roll panto” is universally popular and other actor-musician shows on local themes, Our Blue Heaven or Grandma Saves the Day, have proved equally successful. The NWT is the lead producer for a major national initiative, Ramps on the Moon, partnering other regional theatres in a six-year programme to increase opportunities for disabled actors, technicians and creatives within the sector. The NWT is partnering with commercial producer, Adam Spiegel Productions Ltd, to take its acclaimed production of Once on a major national tour next year and is cultivating a reputation as a leading producer of new British musicals. In recognition of the breadth and success of this work, Sarah was one of the few regional producers to be named in The Stage’s Top 100 list of the most influential figures in British theatre.