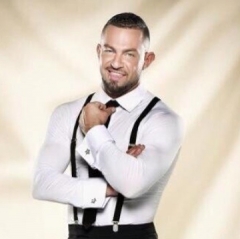 Robin’s impressive career was initiated by his parents when at the age of three they enrolled him in a local dance school in Ipswich.

From the very beginning, Robin studied both Ballroom and Latin dance eventually competing in those disciplines at the highest possible levels. His skills eventually led him to represent England, amassing numerous championships, both on the domestic and international level.

In 2001 Robin was cast in the ground breaking and critically acclaimed dance show Burn the Floor. A show in which he was to tour the world with for the next 10 years culminating with a 9-month run on Broadway.

After such success, it was inevitable that Robin would be asked to join the cast of BBC TV's Strictly Come dancing. Over the next 5 years Robin arguably became one of the most recognisable faces on British television being partnered with Patsy Kensit, Anita Dobson, Deborah Meaden and Lisa Riley. And danced alongside stars such as Neil Diamond, Rod Stewart and Alice cooper just to name a few.

This was all followed by UK tours in such shows as Strictly Come Dancing LIVE, Puttin on the Ritz, Dance To The Music and his own creation Keep Dancing

Robin is the only person to have featured on Broadway, the West End & Strictly Come Dancing all in the same year. His charity interests include supporting Inspire Suffolk and Stonewall.