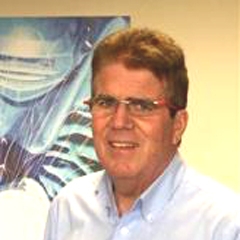 Richard started his career carrying out a five year apprenticeship as a toolmaker in Surrey. He worked his way up through the ranks gaining hands on experience in all aspects of manufacturing. He was promoted to the role of Production Manager when the company moved up to Brandon in Suffolk which he ran for many years. He then formed his own engineering company Warren Services in 1990; this year celebrating 25 years of very successful trading.

His passion is training apprentices which he recognised very early on was the only answer to fill the skill shortage. He has been training his own apprentices for the last 20 years and still believes this is the best approach to training the workforce of the future.

His son has now taken over the company as Managing Director, with Richard as Chairman. Richard still remains closely involved in developing the company’s Apprenticeship and Training Programme. Warren regularly holds open days for local students and other businesses to help them see what apprenticeship training involves; many previous apprentices now hold key positions within the company.

Over many years Richard has taken a high profile role in the economic development of the engineering sector both locally and nationally. He is currently a member of New Anglia LEP Skills Board, Norfolk County Council Skills Group, a STEM and Apprentice Ambassador and, until recently, was Chair of SEMTA for East of England for many years; he is still actively involved with many other national and local organisations. Richard has frequently lobbied and met MP's, Ministers and senior officials from various Government Departments in his quest for better funding, recognition and training for SME's.

Last year Richard was recognised by the Manufacturing Magazine as one of the Top 100 most inspirational individuals in Manufacturing in the UK.

He is now working very closely with West Suffolk College where they have both recently signed an agreement to show their commitment to one another. He is also on their Industrial Board and working with them on further developing their engineering facilities.