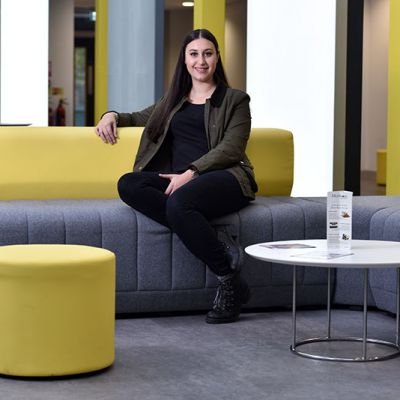 I applied for Midwifery but the year before I was due to go, I was diagnosed with Crohn’s Disease. I spent five weeks in hospital and had an operation. I was in recovery and started my course in February 2012, but became really unwell again and had to go back in to hospital.

I had ongoing treatment for Crohn’s, which resulted in my hair falling out. So I was head to toe bald. It made it very difficult for me to go back to university. I didn’t feel confident in myself and I didn’t feel as a student midwife I would have been able to give the best possible care that I needed to. However I had developed a passion for events, so I did a straight transfer and started on my events course and never looked back.

It was the hardest decision of my life to have to withdraw from Midwifery but I knew at the time I wouldn’t have been able to give it my all. I don’t have any regrets. It led me to where I am today being president of the SU, which is something I never could have foreseen happening! Especially being the first female to win.

It’s not always easy for people to talk about what they’re going through especially if it’s an invisible illness, hair loss happened to be the one thing that made it visible but that’s not typical of my disease. Don’t be afraid to talk about it - you’ll find so many people reach out to you. You start forming networks of support that way. When I was first diagnosed I knew nothing about Crohn’s and no one with it, talking about it breaks the stigma.

Perhaps prior to Crohn’s I was a very closed book, but what’s the point in hiding your journey if it might help someone else? I’ve had Crohn’s for six years now. Situations like this shape you and test you, but it’s encouraged me to seize the opportunities and see the positives.