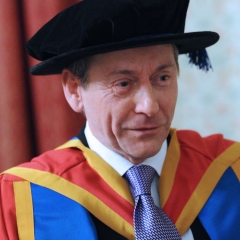 After retiring from the sport in the mid-eighties he has been a television and radio presenter, commentator, ice dancer and producer of several ice events here in the UK and in America, the first being Sport Aid at the NEC in Birmingham in 1986 in aid of the Band Aid Trust. Nicky became known to a new generation through his role as judge on ITV’s Dancing on Ice.

Originally from Liverpool, Nicky and his family now live in Ipswich. He has forged links within the local community in Suffolk supporting many local charities and organisations such as Dance East and Suffolk Family Carers.

He was Marketing and Communications Director of The Shaftesbury Society for five years, during which time he gained a Masters in Marketing from Bristol Business School at The University of the West of England. After this he endeavoured to develop ice rinks in the UK.

He told the graduating students on 21 October 2015 “I knew what I wanted to do when I was 16 but I didn’t have the courage to step or the knowledge of how to make that happen so now I am doing that. It’s about finding the courage to step, to do what is in your heart. You are at the start of your career, you can change the world, your ability can literally can redefine how things are done. So who here is the radical one, who is the one with courage to go for their dreams , who is the one who is thinking I can’t do that because everyone says I can’t, will the time is now, that dream in your heart, that going for what you love that fires you up. When you do what you love you will find other things come around you and you can make a difference.”