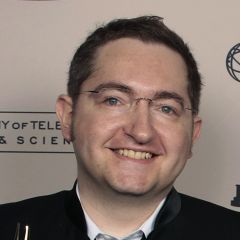 Nic Benns is an Emmy award winning titles director and co-founder of film design studio MOMOCO.  He has been making main titles for 12 years, gaining international recognition for the sequences.  He has forged a career in film and television on both sides of the Atlantic.

Film credits include Contraband, Salmon Fishing in the Yemen, The Three Musketeers, One Day, An Education, 30 Days of Night, Alien Vs Predator and Love Actually.

TV credits include Ripper Street, Misfits (for which he was BAFTA nominated), Luther, The Fades and Great Expectations for which he won an Emmy in 2012 for Outstanding Main Titles.  Nic's titles for Strike Back were also nominated for an Emmy and in Britain his work on Misfits led to a BAFTA nomination.

Nic has lectured extensively on the subject at design institutions and universities all over Europe and in the US.