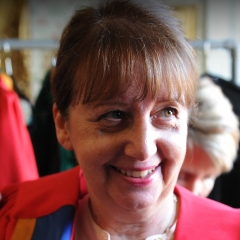 Known as the ‘FIND lady’, Maureen was born in Ipswich, the youngest in a family of seven children. She attended Whitton Primary School and Thurlestone Secondary Modern. Family circumstances led to her leaving school at the age of 16 to work as a nanny. After she got married she did secretarial work soon finding herself in the role of company ‘Agony Aunt’. Maureen says the cornerstone of her life is her Christian faith, which grew steadily from her Sunday School days at Whitton Baptist Church. She became a youth worker and it was through this she became aware of the Revd Steve Chalke’s Christmas Cracker project encouraging youngsters to raise funds for developing countries.

By 1990 she was the Ipswich coordinator for the event and her Princes Street restaurant was one of the highest fundraisers in the country. Taking any food left each evening to the Ipswich Homeless Families Unit or the Women’s Refuge, she soon learned of greater needs. This prompted Maureen to start FIND, the Families in Need charity that now provides anything from basic food parcels to whole households of furniture to families or individuals affected by poverty or dispossession. FIND, which received the Queen’s Award for Voluntary Services in 2005, celebrates 25 years of service in 2015 and estimates to have helped around 50,000 people.

Maureen, whose originally aim remains ‘that every child should have a good clean bed and not go hungry’ was awarded an MBE in 2009 and received the High Sheriff of Suffolk’s Volunteer of the Year award in 2013. Maureen has fostered for 17 years and adopted two sons. She is supported by her husband Widge.

Receiving her award, Maureen said “FIND, families in need, individuals, people who could be your neighbour. We care for anyone, for everyone, wherever there is a need. This town and its surrounding areas are very precious to me, the children who one day will be sitting where you are and those who won’t, children where no opportunities come their way and children who reach teenage life with mental health issues and they have given up. You are the caretakers of our future; you are the ones who are going to be caring for me and my peers. You are the ones who are going to have to guide the little ones who come along, don’t fail them, and don’t fail your capacity. We all have the capacity to help one another; don’t look down on anyone who is already down. The smile you give a stranger could be the only smile that they receive that day. That hand your hold out, the hand of friendship. You have your aims, your aspirations, and your goals going forward but be prepared because sometimes when you take a route through life, something happens and there is a diversion. Be prepared to divert you never know where it might lead you. I am so grateful and thankful that I have a town of people that I can care for and one day maybe one of you will take over from me, that you will be the lady from FIND, there is work to be do. The hungry will always be us, the poor will always be with us, but we need as many hands on deck to make sure we care for one another.”