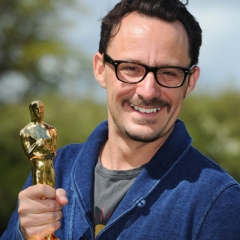 Mat Kirkby is an Oscar winning writer-director living in Shottisham near Woodbridge.

In 2015 he won Best Short Film at the Academy Awards for The Phone Call starring Sally Hawkins and Jim Broadbent, and famously name checked the Pump Street Bakery in Orford in his Oscar acceptance speech, stating that he was ‘Particularly happy as this means I now get a free donut at my local bakery’.

Mat has worked for Sir Ridley Scott making commercials and music videos for over 10 years, directing videos for the likes of Adele, Muse and Fatboy Slim. His music videos have had over 500 million hits on Youtube.

He is currently working on his first feature film Code of Life, which follows the true story of the epic race to map the human genome.