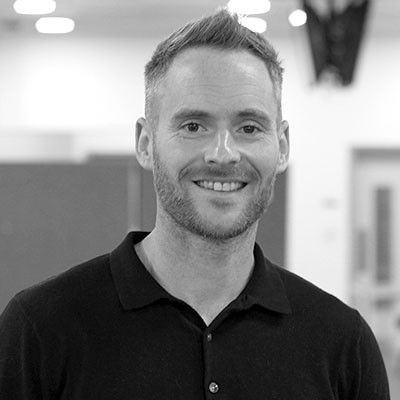 School of Health and Sports Sciences

Mark is an accredited (UKSCA) Strength and Conditioning Coach with a wealth of experience working within football. Whilst completing his BSc in Sport and Exercise Science (first-class honours) at the University of Brighton, he gained experience at Cambridge United (as U18 Strength Coach) and Watford (First Team Sports Science Intern) Football Club.

From here he completed a Post-Graduate Certificate in Education (PGCE) at the University of Greenwich whilst also working part-time as Academy Sport Scientist at Norwich City. His first full-time role came at Southampton where he held the title of Academy (U18) Strength and Conditioning Coach, supporting players like Luke Shaw, Calum Chambers and James Ward-Prowse into the first team. During this time, he also completed his MSc in Strength and Conditioning (Distinction grade) at the University of St Mary’s Twickenham.

He then moved to Arsenal to take up a similar role where he was responsible for the physical development of players such as Serge Gnabry, Hector Bellerin and Alex Iwobi. In addition, he supported every U23 and U19 (Youth Champions League) game.

Wanting to move back to the local area (Suffolk) he created his own consultancy company where most of his work was contracted to the English Football Association. Although having primary responsibility to provide physical performance support to the Men’s U18 squad, he also worked with the Men’s U15, U17 (including the 2015 World Cup in Chile), U19 (including the 2016 European Championship Finals) and U20s squads, Women U18, U19, U20 and Senior squads as well as supported on Goalkeeping camps. Furthermore, he tutored on the UEFA A, Advanced Youth Award and Physical Performance Coach courses.

Having achieved his aspirations in youth football he was offered a first team role (Senior Physical Performance Coach) at Huddersfield Town for the 2017/18 season helping them reach their goal of retaining Premier League status.

He now has a desire to settle in the local area (Suffolk), complete a PhD and become an active member of the research community.