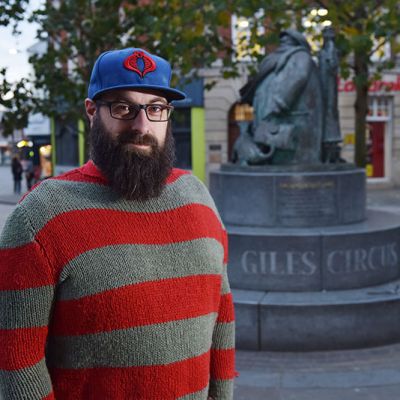 I’ve been a comic book fan since childhood; every time my Mum went shopping she would pick up The Beano and The Dandy. I knew early on that I wanted to do something with comics. I opened up my own comic book store with my friend when I was 25. It started off in my Mum’s attic as an online business and moved on to subletting the ground floor of a tattoo parlour and then owning our own premises.

We would travel all over the UK to conventions and to the New York Comic Con. Unfortunately, as much as I knew comics and the product very well, I didn’t know about the business side. We declared bankruptcy in 2010.

That was a really low patch. At that point you’re just thinking you’ll never be able to get a mortgage, a credit card or run your own business ever again. A few months later, I broke my back on holiday. I didn’t realise the extent of the damage at the time and my GP diagnosed me with a herniated disk.

After losing the feeling in my right leg, I was rushed through for an emergency MRI and surgery. I’m lucky to say I walked out of the hospital the next day. The surgeon had said if I hadn’t got there so soon, I would’ve been paralysed for life.

The events that occurred gave me time to think about what I wanted to do and gave me the motivation to pursue what I love – I’m now writing my own comics and studying Screenwriting, with a view to writing and eventually directing films. You have to look at the positives in life and what you can take from them.