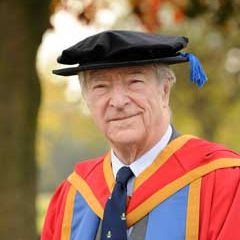 Lord Cunliffe worked as an architect, city planner, project manager and management consultant during a varied career. Schooled in the USA and at Eton, after an engineering apprenticeship he studied architecture at Cambridge and the Architectural Association.

Qualifying in 1959, Roger worked for firms in the UK and USA before returning to the Architectural Association in 1969 as its Director. In 1971 he became a principal in private practice, with projects from Sudan to Siberia. He finally retired in 2004.

His work has included the Commonwealth Institute in London (1958-9, and recently); university buildings, apartments and factories in the USA; trade fair complexes in Bangkok, Khartoum, Nicosia and Novosibirsk; city planning in Central Lancashire and Baghdad; (project) management training in Scotland and Sweden; and the programme of British garden festivals. Towards the end of his career Roger specialised in the office workplace, and has co-authored two books on the subject.

Throughout his career he has been involved in education, both general and professional. He has served on the governing bodies of Lancing College and Goldsmiths' College. In the 1970s he was an early student at the Open University (mathematics & systems studies). He is a Court member of the Goldsmiths' Company (Prime Warden 1997-98), with close experience of both its craft and charitable activities and, more recently, with the establishment of its new training centre.

In Suffolk, Roger has been awarded an Honorary Doctorate of UCS. Professionally, while at the Architectural Association he was also Director of CASE, only the second centre for architectural CPD in the country (and much later he was an adviser to IAAS, the original centre at the University of York).

For 14 years he was on the board of the College of Estate Management and chaired its Education and Research Committee. Throughout his career he has been involved in professional conferences here and abroad, as speaker, chair and organiser. And he remains a perennial student himself. He and his wife divide their time between London and their Suffolk home, where they have a small farm and woodlands. His creative recreations are writing, pottery, silversmithing and planting trees.

Lord Cunliffe is also a Visiting Senior Fellow in the Arts in the School of Engineering, Arts, Science and Techology.