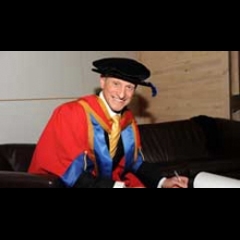 Liam is an international martial arts sportsman. He holds the rank of Grand Master 8th Dan in Karate and has won English and British Championships. Liam was a finalist in the European Karate Championships and competed for Great Britain at world level. He is also the current President of the Commonwealth Karate Federation, member of the British Karate Federation Executive Committee and a former Chair of the English Karate Governing Body.

Liam has been instrumental in developing the sport in the East, and is coach to a number of British, European, Commonwealth and World medalists. Liam is Vice Chairman of the United Kingdom Karate Referee Organisation and as a qualified European and World Karate Federation Referee he has officiated at over twenty World, Commonwealth and European championships since 1994 including two FISU World University Karate Championships.

Liam is partially sighted and is highly regarded as an ambassador for Karate. During 2005 he was a commentator for Sky Sports during the Commonwealth Karate Championships in New Zealand.