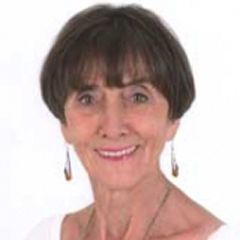 June Brown MBE is a British actress, best known for her role as the busy-body, chain-smoking gossip Dot Cotton in the long running British soap opera EastEnders and for making other high profile television appearances on shows such as Doctor Who, Coronation Street, Minder, The Bill and The Sweeney.

June, the eldest of five children, was born in Needham Market, Suffolk in 1927 before being evacuated to Pontyates, a small village in Wales, during the Second World War. During the later years of the war she served in the Wrens (Royal Navy) and was classically-trained at the Old Vic Theatre School

After an eight-year stint on EastEnders, starting in 1985, June returned to the soap for her latest run in 1997, although her career first kicked off over 40 years ago with the TV drama The Buried Man. Since then the veteran actress has earned theatre credits for both acting and directing.

June has also starred in the wartime big band comedy Ain't Misbehavin (1997), and played Nanny Slagg in the BBC's big-budget production of Gormenghast in 2000. She had a number of small roles in several famous movies, appearing as the grieving mother of an undead biker in British horror flick Psychomania (1971), as well as Sunday Bloody Sunday (1971), Straw Dogs (1971), Murder By Decree (1979), Nijinsky (1980), The Mambo Kings (1992), and Bean (1997), the hugely successful spin-off of Mr. Bean.

June has also been active in British theatre, directing Pin Money (by Malcolm Needs) in London, and Double D in London and Edinburgh. She also played Mrs Danvers in a production of Rebecca. Other plays include An Inspector Calls, The Lion in Winter, A View from the Bridge, and numerous pantomimes including The Witches-in which her sister also performed.

June received a Lifetime Achievement award at the 2005 British Soap Awards, presented by her close friend Anna Wing, formerly EastEnders' Lou Beale). In 2006, June appeared as Aunt Spiker at the Children's Party At The Palace, an all-star event to celebrate the Queen's 80th birthday.