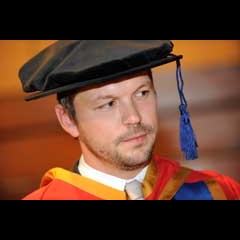 Jimmy Doherty is a Suffolk based pig farmer and television presenter.

He studied at Coventry University's zoology department and has a PhD in entomology. He is married to Michaela Furney, who is also his business partner.

Jimmy was a 28 year-old from Essex when he first captured the publics attention, when he was the subject of the BBC documentary Jimmy's Farm. Before Jimmy's Farm, he had studied insects, and had no qualifications for pig farming. The series followed his efforts in his first year of pig farming. Jimmy and Michaela set up The Essex Pig Company, utilising free range practices to produce high quality meat. Based around various rare breeds, the core species is the endangered Essex, together with the Berkshire, Gloucester Old Spot, large and middle Whites; Soay and Jacob sheep and Red Poll cattle.

As well as attending farmers markets in London and East Anglia the company despatch internet orders and are represented in Holland. Jimmy's Farm Farmers' Markets are held on the first Saturday of each month.

In 2008, he presented the six-part BBC2 series Jimmy Doherty's Farming Heroes and in 2009 Jimmy Doherty hosted Jimmy's Food Factory on BBC1, in which he decamped to a Suffolk barn to set up his own food factory.