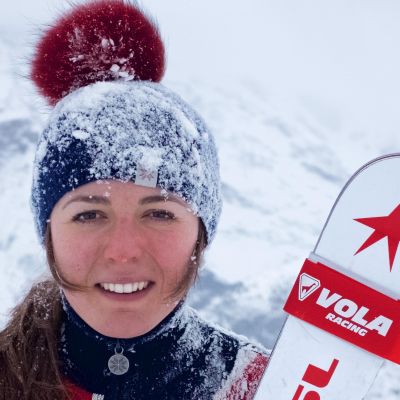 Ipswich based Telemark skier, Jasmin Taylor, is tipped to be one of the country’s most successful winter sports athletes ever.

“In the summer, I live in Ipswich and use the time to catch up on my studies and fitness train. In the winter, I am training abroad on the glaciers and mountains getting ready to compete on the World Cup FIS telemark skiing circuit.

I love studying at the University of Suffolk, it gives me an outlet and focus away from the pressures of racing and allows me to further develop my career. It’s a great environment, my tutors are very supportive and the course is so inspiring opening up many opportunities for the future.”

Jasmin recently spoke to the East Anglian Daily Times about her success:

‘Having been part of the international circuit since 2011, 23-year-old Jasmin claimed her first senior World Cup podium in 2013/14 and followed it up in 2014/15 with a bronze in the World Championships, becoming the first Brit to ever medal in the competition.

Outside of skiing, Jasmin is just coming up to the half-way point of a degree in Sport and Exercise Science at the University of Suffolk. She’s stretched it over six years to fit around her training and competitions across the world, and will be catching up on her work over the summer.

“My lecturers have been very attentive in helping me through my degree. I also appreciate having a different aspect to my life other than skiing. It’s good to have that support from the university as well.

“It’s nice to have other obligations. Having that to work towards is really positive. I love being back at the uni – in the beginning I was sceptical, I didn’t want anything to take away from my skiing.”

Far from doing that, the university has provided more to Jasmin than just the base to study a degree.

Among her personal support team is Manos Georgiadis, a psychologist based at the University.