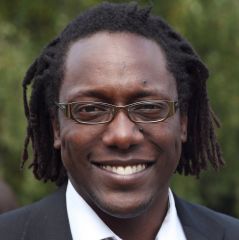 Henry Khaaba Olonga was a professional cricketer until 2003, playing Test cricket for Zimbabwe and domestic first-class cricket in Zimbabwe for Mashonaland and Manicaland. When he made his Test debut in January 1995, he was the first black cricketer - and the youngest person - to play for Zimbabwe. His international career came to an end in 2003 after Olonga and his white team mate Andy Flower wore black armbands during an international cricket match in the 2003 Cricket World Cup to "mourn the death of democracy" in Zimbabwe. Death threats forced him to live in exile in England.

Henry Olonga made his debut in first-class cricket in March 1994, aged 17, playing for Matabeleland against Mashonaland in the Logan Cup. He took five wickets in the match, but had varied performances over the next couple of years. He continued to play domestic first-class cricket for Matabeleland until 1998-99, and then for Mashonaland A in 2001-02 and then for Manicaland in 2002-03.

Henry Olonga is now pursuing a career as a cricket commentator and singer and released an album Aurelia in 2006. His autobiography, Blood, Sweat and Treason, was released in July 2010 by Vision Sports Publishing and was longlisted for the William Hill Sports Book of the Year 2010.