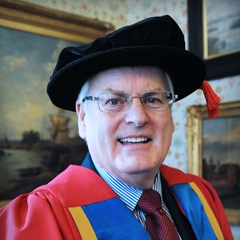 Graham Butland has been the Chief Executive of East Anglia’s Children’s Hospices (EACH) since 2003. Under his leadership EACH has become one of the leading children’s hospices in the world. It is one of the region’s largest charities, with hospices in Milton, Quidenham and Ipswich. Graham Butland has overseen the Treehouse Appeal, a multi-million pound fundraising drive to build a new hospice in Ipswich, increasing the provision of support on offer. At the end of 2014 EACH launched another multi million pound appeal, this time in Norfolk. EACH is committed to offering children and families choice and is proud that nearly 50% of its services are provided in the child’s own home. The charity was chosen by HRH The Duchess of Cambridge as one of her first Royal Patronages. The Duchess’ involvement has raised the profile of EACH and paediatric palliative care internationally along with the support of other celebrity patrons and supporters. EACH is keen to share its expertise and has been working closely with organisations in Australia and Malaysia to expand hospice care for children and young people.

Before joining EACH Graham held senior posts in HM Customs & Excise, The Department of Health, and the NHS.

Graham has been Leader of Braintree District Council since 2004 and is also a member of Essex County Council.

During his address to students graduating from the Department of Health Studies, Graham Butland, who received an honorary fellowship said, “To you I say a huge congratulations, I am sure there have been times over the past few months and years when you didn’t think you would get there and questioned whether it was worth it. You’ve done it and you can be very, very proud of yourselves for that achievement.

“I don’t feel this is an honour and I am not accepting it in the way it is awarded for me personally, I believe very much it is as a result of the organisation of EACH and the many people who work there. The group I want to share it with is the volunteers, we have some 800 volunteers across East Anglia who do all sorts to help us, we could not survive without the help of the volunteers.

“The next group I feel I am accepting this award on behalf of is our staff. I have said before that I have the best job in East Anglia. I have a workforce that are so committed to the organisation but in particularly to the children and families . When we talk about life work balance at EACH it is usually along the lines of ‘you really ought to go home’. I am amazed in the way that all staff are so dedicated to the cause.

“And finally I would like to accept this award on behalf of the children and the families who use our service. Of course the parents of the children that we provide care and support to will never come to a ceremony like this for their children. Their children will not survive into adulthood but they will make a contribution. Our strapline at EACH is that we are a place for living. Our philosophy is to maximise every moment of a child’s life no matter how short that may be.” “I would say to those graduating today there will be periods in your career when you will think ‘life is tough’, one piece of advice always concentrate on patients, on your clients who by in large, they will be having a much tougher time than you. You can do so much to help other people.”