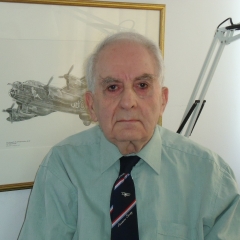 Frank Bright was born of Jewish parents in Berlin in October 1928. He spent the first 18 years of his life on the continent. All of them were eventful, immensely depressing, frightening and dangerous due to German virulent and relentless anti-Semitism which cost the lives of 6 million Jews and took him through ghetto, Auschwitz, where his parents were murdered, to a slave labour camp. He survived, just, but had been robbed of his youth and an education on which to build a future.

He arrived in England in June 1946 and by working during the day, attending evening classes and completing correspondence courses, became a Civil Engineer in 1962 and was awarded a BA by the Open University in 1983.

He worked for the civil service, contractors, consultants and architects and for the last 32 years in local government. He retired in 1994.

Hidden by Czech friends and returned to him was a class photo, taken in Prague’s Jewish school in May 1942, shortly before its closure. It was the film “Schindler’s List” which awakened an interest in the Holocaust and between 2000 and 2006 Frank traced the fate of most of his fellow classmates, of their siblings and parents to sustain that interest. Of the 131 children and adults identified 107 were murdered. The photo encapsulates the period and forms the background to the talks on the Holocaust which Frank has been giving to schools in Suffolk since 2007.

By common consent Frank’s talks on the Holocaust in general and of his experience of it in particular makes an impact on students studying the subject by hearing it from somebody who lived through it. At the same time Frank believes that he brings to their attention and speaks for those children whose lives were so cruelly cut short.