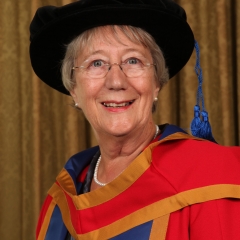 Elizabeth Milburn is a highly regarded member of the community of West Suffolk College and is particularly well known for her commitment and dedication to education right across the age range.

In 1989 she became a governor at West Suffolk College and has chaired the corporation since 1999. Under her guidance the College has achieved national recognition being graded 'Outstanding' in every category by Ofsted; Beacon Status; Sunday Times100 Best Employer in 2007; the Training Quality Standard in seven vocational areas (the only English organisation to achieve at this level).

Under her chairmanship the College buildings and facilities have been substantially improved and student numbers have grown by 28%. She chairs the Suffolk FE Strategic Forum and is a prime mover within the Regional College Chairs' Network. Elizabeth was also a member of the board of the Bury Theatre Royal (1990-1994), campaigning to raise money for an Endowment Trust and chairing the Trust since 2004.

She has also been on the Board of the Learning and Skills Council and until 2010 was chairman of the Bury St Edmunds Past and Present Society, and is working with volunteers on a lottery funded project of historical research. In January 2010, she was awarded an MBE for services to Further Education and the Community.

During the 1960s she served on the Whepstead Village Hall committee and helped raise money for a new community centre. She initiated a village newsletter which is still going strong. She ran Holiday Fun sessions for local children during holidays and she worked as a part-time teacher in two local primary schools. She was one of a small group of voluntary guides to Bury St Edmunds and as a Blue Badge guide.

Between 1982-1997 she became a volunteer in the National Adult Literacy programme. In 1989 she was elected to Suffolk County Council and was re-elected a number of times, standing down in 2005.