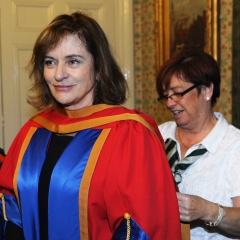 Diana Quick is an internationally acclaimed actress, known for playing Julia Flyte in the television adaptation of Brideshead Revisited, a role in which she was nominated for a BAFTA for Best Actress.

In 2009, Diana published a memoir A Tug on the Thread delving into her father’s family history in India, and the ambiguous status of mixed race children of the British Raj. She has also translated and performed internationally in Simon De Beauvoir’s The Woman Destroyed.

Diana lives near Aldeburgh. She says she loves ‘Suffolk’s big skies’ and has enriched the county’s cultural offering by curating the annual Aldeburgh Documentary Film Festival for the last six years.