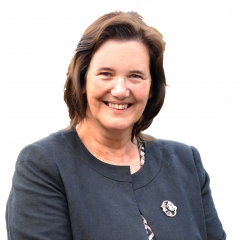 Christine Dobson was part of the team that sought to develop the University for Suffolk.

She was educated at the Ipswich High School for Girls through a direct grant scholarship and her early career was in radiography where she became the Principal of the East Anglian College of Radiography. She led the development of the first BSc and MSc degrees in radiography in the country.

Christine became the Director of Academic Development at the University with a strong focus on quality and the student experience - areas she felt were highly important. During her career she has held many national committee memberships and chairs, published and presented papers and externally examined in the UK and overseas. She was invited to 10 Downing Street in relation to her work on Foundation degrees.

Christine retired in 2014 but her passion for education has not diminished and she is currently chairing the University of the Third Age in East Suffolk.