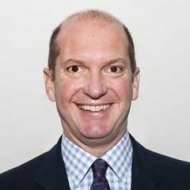 Barry joined Aspall in 1993 taking over the sales role from his father John, becoming only the fourth salesman Aspall customers had seen in the whole of the 20th century. Barry’s background is customer and quality focused, having previously worked for BMW in North London. He joined Aspall as a partner in the business taking on responsibility for sales and marketing whilst his brother Henry managed production. The business focused primarily on own label apple juice and vinegar with their Aspall branded cider selling through a few local outlets and their Aspall branded vinegar through health food stores. In 1997, Barry led the project to redesign the Aspall vinegar range which was the start of the journey that has led Aspall to becoming the leading speciality vinegar brand in the UK today with 11 varieties in the range.

Barry is also President of the Vinegar Committee of the European food association Culinaria Europe, which supports producers by voicing their members’ interests and concerns to the European Commission and Parliament. In 2000 the brothers re-launched their cyder range with a new recipe and a unique bottle inspired by one that their great grandfather JB Chevallier used in the 1920’s. In 2003 the brothers launched Aspall Draught Suffolk Cyder in keg initially selling it through local Suffolk pubs. Now available in pubs and bars nationally Aspall is fast becoming available in overseas markets such as America, Japan, Russia, Brazil and China. Aspall has been voted a ‘cool brand’ every year since 2011 including 2016, complementing their success in picking up awards such as the ‘World’s Best Cider’ and in 2011 Aspall Draught Suffolk Cyder was declared one of the 25 ‘beers’ that truly wowed the editorial team of the American drinks magazine ‘Draft’. After becoming Managing Director of Aspall in 2008 Barry was appointed Chairman of the business in 2011.

Barry is a keen countryside enthusiast and also oversees the running of the estate which includes preserving ancient woodland and the broader management of the orchards. Aspall maintain their heritage and history is extremely important to them. The spelling of ‘cyder’ in the branding is because that’s how cider was spelt when Clement started the business in 1728. His grandmother, Perronelle, after whom one of their latest cyder varieties, Perronnelle’s Blush is named was a founder member of the Soil Association – the orchards have been organic since 1946. She was also one of the first women to attend university. At Aspall they practise evolution not revolution. In 2013 Barry started the project of archiving, cataloguing and recording all the records held at Aspall including the original accounts from 1728. They are making a digital record of papers which were found in the loft, boxes and boxes of notes, documents, letters and invoices dating back to 1702 when the family first moved into the hall. Barry is working with a team from the University of East Anglia who are thrilled with the discovery because it’s an insight into everyday life in the 18th century and not just a sterile collection of facts and figures. It turns out that some of the observations are written in rhyme. The aim is to finish in time for their 300-year anniversary in 2028.