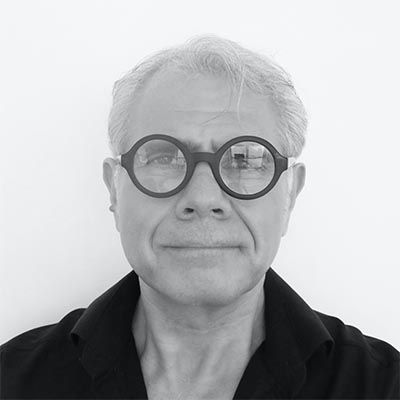 Armin is a German-British architect, practicing since 1994. He gained his Diploma in Architecture at the Koblenz University of Applied Sciences, Germany in 1992. He has worked on a diverse selection of international projects from designing a cemetery or Science Fiction Museum to designing and building University Laboratories. He was part of design teams winning competitions to designing & building the multimillion Headquarter of the Berliner Wasserbetriebe.

Before setting up his practice in Berlin he has collaborated with a number of well-established architects in Germany, like Joachim Ganz, Prof. Hans-Peter Achatzi, Volker Theissen, Manfred E. Gehrman and Alexander von Canal. After moving from Berlin to London, he founded together with his wife Isabella in 2009 their RIBA Chartered Practice Ganguly Architects. Their small practice works on a variety of schemes from micro residential projects and Korean restaurant designs to designing and building residential block of flats from ignition to completion. The motto of Ganguly Architects is "Architecture & Design Made in Britain with German Efficiency and Some Indian Spice".

Armin has laid his first brick in 1983 and was since that time fascinated by architecture. After visiting the Neue Nationalgalerie in Berlin for the first time, he wanted to become an architect. Still one of the best definitions of being an architect for him is the quote by Adolf Loos "An architect is a bricklayer who knows Latin."

Ganguly Architects aims in their work to create a more effective, resilient and sustainable built environment. Architecture and Design is always a team effort and team success. An architect never stops learning! Most essential for Armin is never to forget, "whatever life throws at you #alwayslookup with a smile!"

- The Links between Architecture and Film

- "Bauhaus Nerdism" Can we still learn from Walter Gropius?