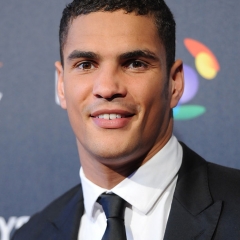 Anthony Ogogo was raised in Lowestoft. It was during Anthony's A-Levels that he made boxing his sole focus.

As a junior boxer he won the Junior Olympics, Junior World Championships and medalled at the European and the European Union Championships. Anthony represented England at the 2010 Commonwealth Games in Delhi winning the silver medal and beating the home favourite and world number 1 en route to a silver medal.

At the London 2012 Olympics, Anthony overcame injury and personal strife to win a bronze medal. He again beat the world number 1 and reigning world champion and favourite en route.

Anthony has since turned professional and is undefeated with a record of 11 wins and 0 losses. He is well on his way to becoming middleweight world champion.