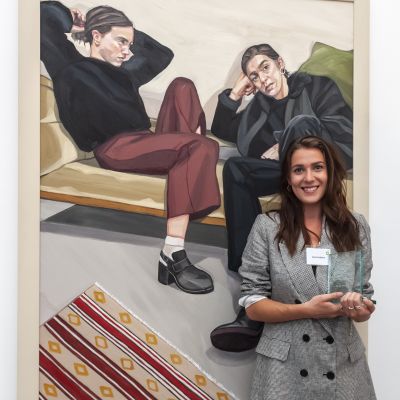 Ania is a ‘rising East Anglian portrait artist’ and was recently awarded the Young Artist Award 2018 as part of the prestigious annual BP Portrait Award at the National Portrait Gallery. The 28-year-old, who lives outside Saxmundham, was chosen for the award after submitting her large-scale work A Portrait of Two Female Painters, which depicts Ania sitting alongside her sister in law Stevie Dix. More than 2,667 artists from 88 countries submitted work for the competition from which 48 were selected for the exhibition. Last year Ania’s self-portrait was selected for exhibition, but this is the first time her work has been considered for any of the prizes.

Ania completed her degree in Fine Art at the University of Suffolk and followed this with short courses at the Prince’s Drawing School and Florence Academy of Art.

Her work has been seen in group exhibitions in the UK and the annual exhibitions of the Society of Women Artists and the Royal Society of Portrait Painters.

Ania has been featured in ELLE magazine's 2019 'Meet the IBAs: Instagram's British Artists'.