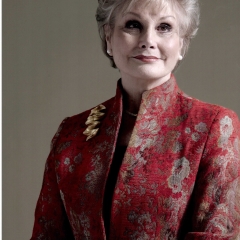 Angela Rippon has been a familiar face and voice in British broadcasting for 46 years.

The scope and quality of her work has been recognised by the Royal Television Society who entered her into their Hall of Fame in 1996.  In 2002 she was voted European Woman of Achievement and in the Queen’s Birthday Honours of 2004 she was awarded an OBE in recognition of her services to Broadcasting, Charity and the Arts. After training as a journalist in her home town of Plymouth, Angela worked for both BBC Plymouth and the ITV station Westward Television before joining BBC National News in 1973.

Angela was a founder member of the commercial breakfast service TV-am in 1982 and in 1984 moved to America to work for CBS in Boston. There she won an Emmy for her work in Arts and Entertainment to add to her Sony award for work on Radio 4, three Newsreader of the Year Awards from TRIC and several other national and international awards for work on radio and television.

She currently presents the consumer affairs programme Rip Off Britain and the holiday series Holiday Hit Squad for BBC 1, and is a regular contributor to the One Show. She remains committed to a number of charities, including the Alzheimer’s Society and Patients Association, She is Vice President of the British Red Cross and President of The Lady Taverners.