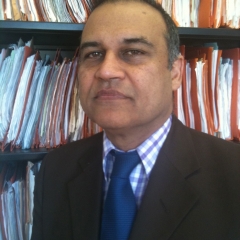 Dr Mohammad Akmal Makhdum graduated from King Edward Medical School in Lahore, Pakistan, in 1982. Specialised in addictions treatment, then joined university of Cambridge psychiatry training programme; trained in Norfolk, Cambridge and Essex. Appointed consultant in Ipswich in 1996. Comes from a 'psychology family'. his father, late professor M Ajmal, is known as the founder of psychology in Pakistan, established the first department of psychology and counselling in Pakistan in 1962; later vice chancellor of the Punjab university and then Secretary of education of Pakistan; his mother akhtar sultana, was a scholar of languages, literature and religion. his younger brother is a professor of psychology and his daughter is a psychotherapist. in 2000, akmal founded and was the first chair of the British Pakistani psychiatrists association, chair of the all ethnic psychiatrists of the UK, then founding chair of the all British Pakistani doctors and currently co-chair of all Indian and pakistani doctors association of the UK. he writes Urdu poetry and runs social blogs.

Dr Makhdum co-authored the Churchill's 'Pocketbook of Psychiatry'. he is deputy medical director of Suffolk mental health services and works for the mental health act commission and the general medical council as adviser. he specialised in developing individualised care models for complex cases and innovative clinical outcome measures. he lives in Ipswich with his wife, farah, of 28 years and his grown up children who are now doing various master degrees in global and international affairs. Akmal was a regular broadcaster at BBC Suffolk for three years, in the programme, thought for the day.