A graduate of the University of Suffolk’s Fine Art degree will have her work considered for the prestigious BP Portrait Awards.

Ania Hobson’s A Portrait of Two Female Painters depicts the artist with her sister-in-law Stevie Dix and explores the relationship between the two of them as painters working in the studio together.

Ania is one of only four artists to have been shortlisted for the BP Portrait Award 2018 at the National Portrait Gallery in London. It is one of the largest art competitions for portrait painters in the world. The artworks were selected from 2,667 entries from 88 countries, submitted for judging anonymously by a panel which included journalist and broadcaster Rosie Millard and artist Glenn Brown. Last year Ania was selected to exhibit, this is the first time her work has been considered for the Awards.

The 28-year-old former pupil of Thomas Mills High School in Framlingham went on to study at Suffolk College before completing a degree in Fine Art at the University. She started her career as a wildlife painter, and one of her first successes was being preselected for the Society of Wildlife painters exhibition at the Mall Galleries in London.

Ania now works full time on her paintings and commissioned portraits, and is based in Asylum studios at RAF Bentwaters near Woodbridge. She is hoping to continue submitting to international exhibitions and is also looking to study further.

Ania said “I feel privileged to be shortlisted for one of the four BP Portrait Award Prizes. Even being selected to exhibit again is amazing. The exposure has been overwhelming. I paint full time so for me this is a really important time in my career. Studying at the University of Suffolk and the Florence Academy of Art were important steps for me, and I was also brought up in 'Arty' Suffolk. Working at Asylum Art studios at the old RAF base at Bentwaters, Rendlesham has been helpful in creating a relaxing space to work in.”

Dr Jane Watt, Senior Lecturer in Fine Art at the University, said, “I am thrilled that Ania has been shortlisted for the BP Portrait Award for the second year in a row. It is fantastic to see how her work has developed since she graduated from our Fine Art course a number of years ago. This year current Fine Art students were able to see her paintings in progress on a visit to her Suffolk studio. It was a great opportunity for them to see her paintings up close and to be inspired by an alumni from their course who has succeeded in establishing herself as a leading British contemporary portrait painter.

2018 will mark the Portrait Award’s 39th year at the National Portrait Gallery. The prize winners will be announced on the evening of Monday 11 June 2018 and the BP Portrait Award 2018 exhibition will run from Thursday 14 June to Sunday 23 September 2018.

To find out more about studying Fine Art at the University of Suffolk click here or come along to the University’s Open Event on Saturday 21 April, register at www.uos.ac.uk/openevents 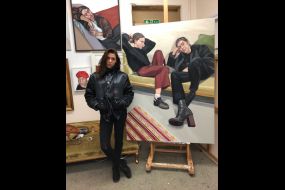