The University of Suffolk has hosted a conference addressing ‘Virtual Violence’ which looked at technology facilitated domestic abuse and control.

The aim of the conference was to bring together multi-agency practitioners, academics and students in order to raise awareness of technology-facilitated abuse, advance understanding around the digitalisation of abusive relationships and to discuss approaches moving forward.

Laura said, “I was delighted to support the University of Suffolk in their efforts to bring together a diverse range of professionals and organisations to share best practice around safeguarding victims of Virtual Violence. The event was a great success and I hope the learning from it is shared across the region. The impact of these offences are catastrophic and it is essential that there are effective services to help victims to recover and rebuild their lives.”

Richard Lister, Vice Chancellor at the University of Suffolk, said, “This is exactly the sort of event that we as a community focused university should be hosting. The research into ‘virtual violence’ is important, has impact and matters to the communities we serve. I am immensely proud of my colleagues at the university who are leading this research.”

The event was held thanks to the funding awarded to the University of Suffolk by the HEFCE (Higher Education Funding Council for England) catalyst fund.

The funding was awarded to universities to tackle online harassment and hate crime. The University of Suffolk is taking a whole university community approach with an aim to increase digital civility and online safety amongst our students by raising awareness via workshops, seminars and conferences as well as the Digital Civility survey and speaking to students directly. The University hopes to increase staff confidence in responding to disclosures with a digital element.

The conference should aid in increasing awareness of phenomena such as revenge pornography and the use of technology in coercive and controlling relationships, something which is becoming increasingly prevalent across young people.

Detective Inspector Ben Clark from Suffolk Constabulary addressed delegates by saying domestic abuse enabled cyber-crime is often regarded as a ‘hidden crime’. He said “Like domestic abuse was a few years ago, we expect the number of cases reported to increase as there is more awareness and discussion around this.” He advised anyone concerned to review their security settings on social media; to use a trusted third party and he said people should question when posting to social media whether they would share that information with a ‘stranger in the street’.

Min Grob started organising conferences on coercive control in 2015. Min is interested in how coercive control and abuse, hidden in full view, can be identified on social media. She is the editor of the online publication CCChat Magazine and spoke at the conference drawing on her own experiences.

She said, “It is a pattern of behaviour that seeks to undermine, to confuse and to have total dominance, total control over the victim. It is about isolating the victim from their friends and family as well.”

“I was in a situation I recognise now that I was vulnerable. I had just come out of a relationship, I was a single mum and there was somebody there who wanted to put me on a pedestal and was, what I thought, everything I was looking for in a partner.  The relationship moved very quickly, within two to three weeks of getting married our relationship all changed. I didn’t recognise the person I had married. I would urge anyone to seek help when they are in a relationship and find themselves having to ‘check’ themselves, when they are worried about causing offence, about causing a negative reaction. There were so many red flags that I didn’t recognise for example the abuser will want to speed the relationship along, they are often projecting an image that isn’t them. The whole idea of coercive control is about keeping a person entrapped.”

“People often don’t recognise behaviour as coercive control. One of the things I am very big on is making the invisible, visible. Coercive control is the most common context in which women are abused. We need to discuss it more.”

Professor Emma Bond, Director of Research at the University of Suffolk added, “The role that everyday technology plays in abusive and controlling relationships is often overlooked or misunderstood – especially by the criminal justice system and the judiciary. Many vulnerable people are re victimised because they don’t get the help and support they need even when they have reported the abuse. Our national survey of police officers, published this year, found that there is limited understanding of legislation and that police officers lack both knowledge and confidence in investigating cases and responding to victims. There is a desperate need for training and awareness raising.” 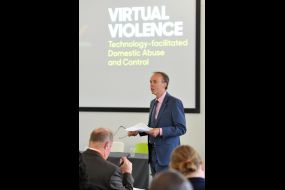