The University of Suffolk is set to become a ‘dementia-friendly organisation’ as recognised by the Alzheimer’s Society.

Dementia refers to an incurable, degenerative group of brain disorders, and the number of people affected by dementia is growing. In the UK alone, dementia will affect one million people by 2025.

Paul Driscoll-Evans, Dean of Health Sciences at the University said, “Health and social care services are struggling to meet the challenge of unprecedented numbers of older people living with memory loss. In recognition of the impact dementia is having on communities across the East of England, the University of Suffolk aims to be a role-model organisation, actively playing a role in ensuring those living with the condition feel understood and valued.”

The University’s pledge will involve an institutional commitment to developing a Dementia Action Plan and becoming a member of the Dementia Action Alliance.  The University will focus on several key areas that seek to raise awareness, support staff and students and promote excellence in teaching and research. These include:

A launch event was held at the University on Thursday 24 May coinciding with Dementia Action Week (21-27 May), which is aimed at calling on everyone to take action to improve the everyday lives of people affected by dementia.

Former Mayor of Ipswich and Chair of Ipswich Dementia Action Alliance, Councillor Roger Fern, addressed the audience sharing his experience of caring for his wife, Pat, who is living with dementia.

Councillor Fern said, “I think it is tremendously important the University becomes dementia-friendly, this is a community issue. We are all part of the community of Ipswich and we each bear a responsibility for those who find life a bit tough. Dementia affects 1,700 people here in Ipswich. People living with dementia find that exactly what they would have done almost automatically, without thinking about it, becomes very difficult. What they need are people around them who help, encourage, support and enable them to live well with dementia. My aim is for Ipswich to become a dementia friendly town.”

Peter Berry from Saxmundham was diagnosed with dementia at the age of 50. Next month he will be cycling from Wales to Aldeburgh, fundraising for Young Dementia UK. He said “I am keen to open the curtain around dementia, to let people into our world. I’m doing the cycle ride to raise valuable funds, to challenge my dementia and to show others that if a normal guy like me can do it, others can too. When I leave my home, I leave my dementia on the sofa; I am the one in control. I don’t suffer with Alzheimer’s, I live with Alzheimer’s and I would encourage anyone to become a Dementia Friend, it is such a simple thing to do to help others.”

The East of England Co-Op shared some of the ways the organisation is dementia-friendly and the event, held at the University’s Waterfront Building, was supported by Gotelee Solicitors.

Charles Rowett, Chief Executive of Gotelee Solicitors, said “As the population ages we are going to know people and we are going to come into contact with people daily who are having to deal with dementia. More organisations have to become dementia friendly and understand what the implications are and how people need to be treated.”

“Having a university within the town is extremely important, not only for the young people but for the whole community. We see ourselves very much as a relationship community organisation and we want to serve our local community; the University is a critical part of that.”

For anyone interested in finding out how to support someone living with dementia or for information on volunteering and fundraising please visit the Dementia Action Alliance website. 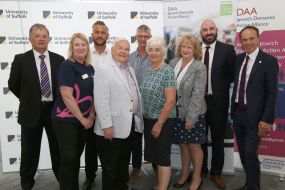 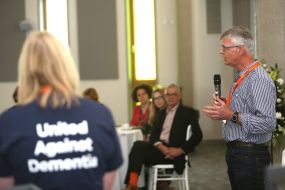