A University of Suffolk lecturer will be taking part in celebrations to mark the centenary of the BBC later this month.

English Lecturer, Dr Andrea Smith, will be co-presenting a five-part series on the BBC’s history of broadcasting Shakespeare’s plays on radio. The series is based on her three years of research and will also feature the actor Samuel West, who has appeared in several radio productions, as well as archive clips dating back as far as the 1930s.

Dr Smith says: ‘Around 150 of these plays still exist and they’re an amazing record of both BBC radio drama and of how Shakespeare has been performed in this country. Listeners will be able to hear snippets of John Gielgud giving his celebrated Hamlet, Judi Dench as Juliet and Richard Burton as Henry V.

‘But these plays – and this series – aren’t just about famous actors in famous roles. What’s lovely about these productions is the range of different voices and settings that have been used. You can also hear actors on location in India splashing about in a reservoir – as well as King Lear in Welsh!’

Dr Smith teaches English at the University of Suffolk. English and Creative Writing was ranked 8th in the Country in the Guardian University Rankings 2022 and Dr Smith’s Shakespeare research is published in leading academic journals. Her passion is encouraging people who would otherwise be put off Shakespeare to give him a try.

‘Shakespeare’s characters and plots are so interesting and exciting – it’s why I fell in love with him in the first place. Yes, he was writing 400 years ago so the language isn’t quite the same as the way we speak now. But that’s the beauty of hearing really good actors speaking his words – they make them understandable. Anyone who’s listened to Judi Dench deliver Shakespeare will know she has a magic touch with the lines – and she’s not alone.’

Dr Smith has also written a blog for the BBC which will be published to coincide with the broadcast and she is currently working on a book based on her research. In addition she and her English department colleagues are running a series of taster sessions for Suffolk sixth formers interested in studying English at the University of Suffolk. 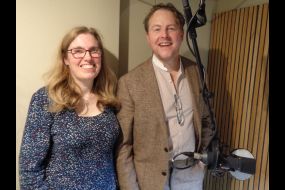