UCS has also successfully met the criteria for University Title, which means it has been granted permission by the Privy Council to become the University of Suffolk. It is planned for this change to occur from 1 August 2016.

The decision also means that UCS will receive direct government funding for the first time, enabling it to expand its teaching and give more young people in the region the life changing opportunity of a university education.

UCS was granted Taught Degree Awarding Powers in November 2015, allowing the institution to award its own undergraduate and taught postgraduate degrees. UCS held these powers in reserve until University Title was secured. Future graduates will receive University of Suffolk degrees.

Founded in 2007 UCS was a unique collaboration between the universities of East Anglia and Essex, and a range of other partners, to establish a higher institution in Suffolk. Until today Suffolk was one of just four counties in England that did not have its own independent university.

Universities and Science Minister Jo Johnson, said For too long many in Suffolk have had to turn to other parts of the UK for higher education. Im enormously pleased that UCS has demonstrated its ability to meet the needs of students and can now be called a University in its own right.

Suffolk has waited a long time for its own University and I would like to take this opportunity to thank our staff, students, the UCS Students Union, our Learning Network Colleges, Board members, partners and colleagues in Suffolk and beyond who have supported us along the way to independence. I would also like to thank UEA and Essex for their support and guidance in our years as UCS.

This is clear recognition that we have consistently demonstrated the quality and track record to enable us to sit alongside any other University in the country. I am very proud of our achievement.

Becoming the University of Suffolk will enable us to expand our work and offer the transformational experience of higher education to even more people. It is expected that we will see an increase in our student numbers and it will make it easier for international students to join us. Over time we expect to grow by 50% and it is anticipated that by 2020, the University of Suffolk could boost Suffolks economy by 25 to 30 million per year.

The Universities of Essex and East Anglia warmly welcomed the news and will continue to work with the University of Suffolk.

Chair of the UCS Board Will Pope said I am very proud of what has been achieved by University Campus Suffolk in gaining full independence and becoming the University of Suffolk. When UCS was created it was anticipated we would achieve this important step in about twenty years; to do so in just eight goes to show the dedication, determination and hard work that this institution not only advocates but lives by. I and my fellow board members would like to pay tribute to all the staff, students and supporters of UCS in fully backing the journey to independence. This is fantastic news for the County of Suffolk, and I hope the University, which the County has awaited for hundreds of years for, will be here for hundreds of years to come, to the benefit of the people of Suffolk and future generations."

Ipswich MP Ben Gummer said A University of Suffolk is a dream fulfilled. That it has taken hundreds of years to realise this dream speaks volumes about the efforts of the people who have made this possible, first among them Richard Lister, who has shown remarkable leadership and tenacity in gaining university status for UCS in record time.

That we will now have a university of our own, one that is gaining a reputation for excellence and endeavour in spreading opportunity to all parts of our community, says so much about the progress we are making as a town and as a county. Ipswich and Suffolk are quickly gaining a status as the most exciting places to be in Europe today an achievement that is in part down to those working in our new university. The future is bright here in Suffolk and Ipswich, and now that we have a University of Suffolk, everyone in our town and county can face it with even greater confidence

Suffolks Lord Lieutenant Lady Euston said"I am delighted that, at long last, Suffolk will have its own fully independent University. This is a turning point in the educational life of this great county, and has been a long time in the making. Suffolk deserves the best of the best. It will be a source of inspiration to future generations of young people. I would like to congratulate all those whose vision, tenacity, and sheer hard work have made it possible. This is a great day for us all." 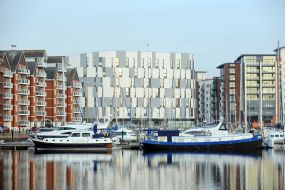