University Campus Suffolk and Suffolk charity Survivors in Transition have presented their research findings in a report and conference today (Wednesday 28 October) called Focus on Survivors: identifying barriers to accessing support for those who have experienced childhood sexual abuse.

The study is thought to be the largest of its kind in the UK, taking in the views of nearly 400 adults who were sexually abused as children about their experiences of services.

The report gives further information into the nature of typical childhood sexual abuse in the UK. It found 70% of abuse happens within families and 51% of survivors were abused by more than one person.

Professor Noel Smith, Head of Department for Psychology, Sociology and Social Work at University Campus Suffolk, said The focus of high profile cases such as the Governments independent inquiry, the Jimmy Savile scandal and the Rotherham inquiry is on less typical examples of abuse. This risks skewing strategic responses to sexual abuse in the UK. Our Focus on Survivors report takes a major leap forward to addressing the striking lack of robust research there is in this field. The findings are important and disturbing. They highlight both the sustained duration over which children are typically sexually abused and the lifelong impact of that abuse. As a society we clearly need to be more strategic in tackling sexual abuse and we are not doing enough to support survivors of abuse.

If there are three things that come out from the research it is firstly that professionals working with children and adults need to ask the question, they need to ask whether people have been abused. It is a difficult question but the risks of not asking do outweigh the risks of asking. Secondly they need to listen to, believe and respect survivors and thirdly they need to use, really effectively exploit the great expertise that there is in our communities in voluntary sector organisations.

The report states that services need to be more vigilant in identifying whether people have experienced abuse. It found only 20% of survivors disclosed because they were asked in most cases, in order to make disclosures; survivors had to bring up the subject themselves.

Fiona Ellis, Operations Director at Survivors in Transition, said Disclosing is traumatic for survivors and they do not receive the help they need for an average of 12 years after disclosing which is appalling. Poor experience of one service can put survivors off from getting the help they need from other services for many years. Survivors were least satisfied with social services and A&E and hospital services. Less than half of survivors felt that they had been listened to, believed or respected by these services.

It highlighted a lot of the things we see on a day to day basis in practice. One of the things that I think really did surprise all of us was that around 50% of survivors experience abuse by more than one abuser in their childhood. Wed really like to see people sit up and take notice of this. It is the biggest survey of survivors and we hope their voices ring out through this and people take notice of what they are saying and what they have experienced. Its not our assumptions; it is actually what people have experienced.

We want to start looking at this culture of professional fear around asking the question and responding to the question. I have never met a survivor who would have been offended if someone had asked them at some point in their life if they had experienced sexual abuse as a child. I think if anything that would have helped them to access services earlier so that feels a really important part of this.

Tim Passmore, Suffolk Police and Crime Commissioner, opened the conference at University Campus Suffolks Waterfront Building. He said One of the things that this department (the Department for Psychology, Sociology and Social Work) does at UCS is to get under the skin of some issues that too many people run away from. I think the work published today is second to none. Focusing on the survivors is crucial. Various parts of the public sector have to up their game and sort themselves out. We dont need to hear the political moaning about budget cuts because I think there is a solution. If we pool resources and work together we can make a difference. Academic research like this today is so crucial; it really makes a difference to where we can direct resources. We need to be held to account, lets not be about what we cant do, lets take a much more positive approach by working together.

Tink Palmer, CEO Marie Collins Foundation and Visiting Professor at UCS, said This research is really important. I think survivors havent had the chance to speak out properly in the past. The more we can draw attention to the impact of child sexual abuse are on people when they become adults and trying to have a fulfilling life, what this report is going to do is to raise these issues and put them on the table and cant escape it. We need to ensure all people who can and are in the position to, take action in particularly to make sure we have the proper facilities to make sure those who have been affected can recover and have safe and fulfilling lives, which is their right.

A full copy of the report can be found at here 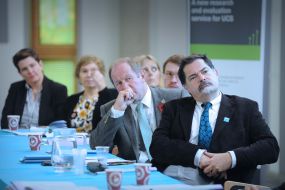