The manager of Suffolk Refugee Support has been recognised for her work with an honorary fellowship from the University of Suffolk.

Rebecca Crerar received the honour in front of students graduating from the School of Health and Sports Sciences today.

Rebecca started working with asylum seekers and refugees in Suffolk in 2000 in her role supporting asylum seekers into accommodation around the UK whilst they waited for their claims to be decided.

Her passion for helping asylum seekers and refugees to recover from horrific circumstances and to rebuild lives in the UK continued in 2005, when she became the Volunteer Coordinator of the then small independent charity, Suffolk Refugee Support.

Since 2005, she has taken over the leadership of the charity and has enabled several thousand refugees and asylum seekers to gain vital help in the form of advice, English lessons, training and emotional support.  The charity has 20 mostly part time staff and over 80 volunteers. Rebecca has successfully secured over £3.5 million in grants from a variety of funders.

Rebecca has been involved in national, regional and local planning for refugees and has recently been awarded, along with five other Suffolk women, the High Sheriff’s Inspiring Leader Award 2019.

Rebecca said, “I am honoured and thrilled to be receiving the honorary fellowship. I am proud to live and work in this amazing county. I am accepting this award on behalf of the many refugees who have fought against unimaginable adversity to make this county their home; whilst remembering the many others who have lost their lives in the conflicts of the world.”

“I have my father with me today who is amazing, my partner who is my rock, three colleagues from work who are the Chairman of the organisation, the charity manager and one of the volunteers. I also have a very special guest, Seble from Eritrea, who is one of our refugee clients. It’s really important for me to share the day with them because this is about a team effort.”

For the graduating students, Rebecca has this message “Everybody you come across in your life, whether they are down on their luck or up on their luck, will bring something to you, they are all humans and they all have a lot to say and to give. It’s about listening and learning from the people you are working with. The most unlikely people are often the ones that bring the strongest messages for life. Growing as a person doesn’t stop with a university degree, it carries on throughout your entire life.” 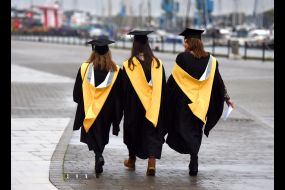