The ninth annual Suffolk Adult Learners’ Awards has taken place at the University of Suffolk.

Suffolk groups and individuals were recognised for their hard work and outstanding achievements over the past year.

The Awards, hosted by Karen Hester, Chief Operating Officer at Adnams and honorary graduate of the University, saw Seraphine Twibanire crowned the ‘winner of winners’ and Deborah Williams from Realise Futures recognised as providing ‘Outstanding Services to Adult Education and Training in Suffolk’.

The Awards were organised by the University and Suffolk County Council. Adnams were the award ceremony drink sponsor.

Miles Cole, External Relations Project Manager at the University, said, “Once again we heard incredibly moving and inspiring stories of the power of adult learning to transform people’s lives, empower individuals and communities and of the dedication of staff and organisations that provide it. The importance of both formal and informal adult learning in supporting people and in helping to reduce the demands on public services, such as heath, cannot be overstated. Congratulations to all the winners and runners up and all those who were nominated.”

Seraphine Twibanire was awarded ‘Inspirational Learner of the Year’ and then chosen by the panel in the final award of the evening being named the ‘Outstanding Learning of the Year’.

Seraphine from Ipswich was nominated by Michaela Freeman who said, “Seraphine has been a student of mine since September 2015. She did not go to school in her home country of Rwanda and fled to the UK after the war there. She is a remarkable lady with a remarkable story. She is also a fantastic student. She progressed through the ESOL (English for Speaker of Other Languages) courses, gaining her Skills for Life Trinity and GCSE certificates. During this academic year, she has attended a further English course, passed her driving theory test and her Life In the UK test. She has also started to plan a book about her life, which she wishes to dedicate to her children, to educate them about Rwanda and her life there. Getting a degree is, in her words, her dream.”

“For someone who received no education in her war-torn country, passing multiple, high-level tests and exams and deciding to write a book about her life, in one academic year is, I think, truly remarkable. Seraphine has achieved all of this since last September whilst being a very busy mother to her three sons and supporting wife to her social worker husband.”

“Not only is Seraphine utterly determined to be the very best she can be, she is always supportive and kind to those around her. She is a wonderful communicator and can make people from any background both understand her and laugh with her. She is strong, caring, charming and humble.”

Commenting on winning both awards, Seraphine said, “I can’t believe it, I am overwhelmed. For anyone wanting to learn I would say the sky is the limit, you just need to work hard.”

Seraphine’s husband, who attended the awards with her, said, “She is amazing and really deserves it.”

Deborah Williams who was awarded the ‘Outstanding Services to Adult Education and Training in Suffolk’ award said, “I have worked in education and training for 38 years, I am so pleased to have this award. My message for anyone considering adult learning is to go for it, it is never too late to learn and it doesn’t matter if you didn’t like school or perhaps didn’t go at all. Second, third and fourth chances are out there- grab them with both hands. It is always a fantastic awards evening and brilliant to see people like Seraphine, the learners, who have overcome so much and done so much. It makes it all worthwhile every year.”

In addition there were two further awards: 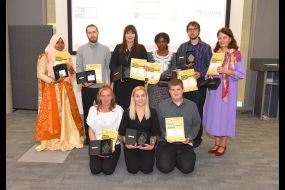