A collection of unique creations are being showcased by ‘the designers of the future’ at an exhibition being in Lowestoft.

The show opened to the public on Tuesday 13 June and features a range of original pieces including ceramics, 3 Dimensional Design, Graphics and Textiles. There is a chance to see some specialist ceramic pieces which have been created with the state-of-the-art 3d printing.

The End of Year Show runs until Thursday 22 June and is being held in the LRC at East Coast College, Lowestoft Campus (formerly known as Lowestoft College), which can be found in St Peters, Street. Entry to the show is free and the show will be open between 10am and 5pm Mondays and Fridays and from 10am to 8.30pm on Tuesdays, Wednesdays and Thursdays.

Find out more about the BA (Hons) Design programme. 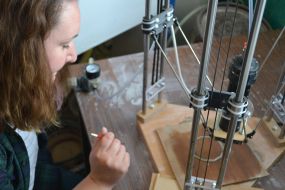