Students from the University’s School of Engineering, Arts, Technology and Science graduated today. They included Daisy Sturgeon who was awarded a BA (Hons) in Graphic Design and now works at StrategiQ  as a Creative and Marketing Executive. Daisy said “I fell in love with the subject because of its ability to help solve problems in an effective way whilst giving me an outlet for creativity. The course gave me the opportunity to explore different avenues in Graphic Design and take in expert knowledge from the tutors and technicians.”

“Having now worked at StrategiQ for a couple of months, it’s clear that the skills I’ve learnt whilst studying at Suffolk have really set me up for the working environment where I can develop my knowledge further from being amongst other experts within the industry.

I’m so grateful for my experience at the University of Suffolk and all that I learnt whilst studying Graphic Design there. It’s given me opportunities which would have otherwise never been possible.”

Camilla Bunn graduated with a First in BSc (Hons) Nutrition and Human Health. Camilla said “I am now a registered associate nutritionist (ANutr) with the Association for Nutrition and am continuing my studies at the University of Suffolk as a PhD student working on a project titled “Functional Gastrointestinal Disorders as a Spectrum of Food Intolerances” that aims to advance knowledge in food intolerances and relevant functional bowel disorders. The degree is fantastic because it’s accredited.”

“For anyone considering Uni I would say go for it. I’m a mature student, I never went straight from A Levels to university. I had about seven years of working first but I realised they had a degree on offer that matched my passion and interest. If you’re really interested in something, just go for it. Take the leap.”

Joseph Balaam was awarded a BSc (Hons) in Digital and Technology Solutions. Joseph said “I began studying the FdSc Network Engineering at the University in January 2017, graduating with a Distinction. Following this, I completed the BSc (Hons) Digital and Technology Solutions (Network Engineering) as a Degree apprenticeship, finishing with a First-Class Honours. I completed both the FdSc and Degree apprenticeship alongside working in the Networks and Telecommunications industry as a Delivery, Operations and Support Engineer. I found as I progressed through the levels of study, the effectiveness, clarity and conciseness of my writing has greatly improved.”

“My supervisor was impressed by the originality of my dissertation and suggested I submit a manuscript to the forthcoming ‘2021 International Conference on Computing and Communications Applications and Technologies (I3CAT) Conference’. My paper ‘Performance of Light-Fidelity (Li-Fi) over Fixed Line and Cellular Backhaul Connections’ was accepted and I later presented my findings. It is now scheduled to be formally published in the conference proceedings which I am delighted about.”

Ipswich-born broadcaster Stephen Foster will be a familiar voice to radio listeners having spent 30 years at BBC Radio Suffolk. He is regarded as one of the country’s most versatile broadcasters and his career spans six decades. He can currently be heard on Radio Caroline, the station which ignited his interest in radio and music when he was still at school in the mid-1970s.

From the outset Stephen has championed the cultural side of his home county. His life-long passion for all types of music has been at the forefront of his various activities - on and off air. Stephen, also known as Foz, has presented thousands of programmes, emcee’d hundreds of concerts and promoted scores of gigs. He has helped make Ipswich Music Day one of the most successful free family festivals in the UK.

Stephen is also a respected music writer, contributing weekly to the East Anglian Daily Times and The Ipswich Star newspapers as well as penning a monthly column for Grapevine magazine. With his encyclopaedic knowledge of the history of rock and pop he has also been involved in compiling many CD releases down the years. Heavily influenced by broadcasting icon John Peel, Stephen has long been a key figure on the Suffolk music and arts scene. Stephen said “I feel immensely proud. I never thought, for one moment, when I started my radio career back in the 1970’s that I would be given an honorary degree. It is a fantastic feeling and it is more than living up to expectations. I was so pleased the University was set up after so many years and it has made such a big impact on Ipswich and the surrounding areas ever since. To be part of the ceremonies this week on the Waterfront really is a dream come true.”

Stephen had this message for the graduating students “Follow your heart, there will be bumps in the road but follow your dreams and always give 100% and things will happen for you.”

After studying engineering at Cambridge University, Robin Christopherson MBE worked as an IT instructor for the Royal National Institute for the Blind (BNIB) before becoming a founding member of UK tech charity, AbilityNet who specialise in advising individuals on technology to help them at home, in education and in the workplace, and helping companies design attractive websites, software and apps that are easy to use by all.

He has been a leading expert on accessibility and digital inclusion for over two decades and a regular speaker raising awareness of the power and potential of technology to transform people's lives.

Being blind himself, Robin is passionate about all areas of technology and his work was recognised with the award of an MBE in the 2017 Queen's New Year’s Honours list for services to digital inclusion.

Robin is also a member of the All Party Parliamentary Groups on Disability (APPGD) and Assistive Technology (APPGAT) and was included in the 'Power 100' list of the UK’s most influential people with disabilities last year, as well as the UN's ‘World's top 100 most influential people in digital government’ list the year before - voted by over 500 organisations including governments and global NGOs.

Robin said “I feel hugely honoured and unworthy- all I have done is played with technology for 25 years, admittedly in an area which is hugely empowering for people with disabilities. Technology is so amazing in levelling the playing field and enabling people to reach their full potential.”

Robin received his honorary doctorate in front of students graduating in courses such as Computer Games Design, Mobile and Web Engineering and Network Engineering. He had this message for the students “The key message I would like them to take away is that inclusive design makes better products for everybody. If you can make them in such a way that they are useable for people with more extreme needs, then they are going to be extremely usable for every user. Accessibility just makes for better products and who doesn’t want to make the best products possible.”

Earlier in the day two staff members from the University, Heidi Love and Sonia Brito, graduated with a Postgraduate Certificate in Academic Practice.

Heidi is the Games Hub Manager at the University “The course involved looking at planning sessions for the students, planning research projects and the best ways to run the programmes and courses. It’s such a great university, everybody is so friendly, and the tutors are very good. I would definitely recommend it.”

Sonia is a careers and employability adviser at the University. “I did the course to support my role. I work with students and academics to embed employability within the curriculum.”

“My daughter is here today, and I think I could be a really good role model for her. I hope I will inspire her to study throughout her life.”

Tomorrow will see the final students from the Class of 2021 graduate. 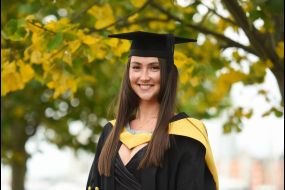 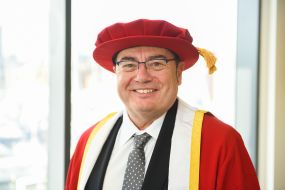 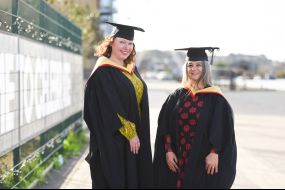 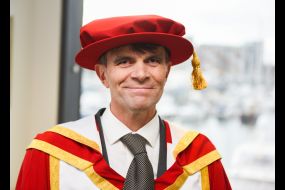 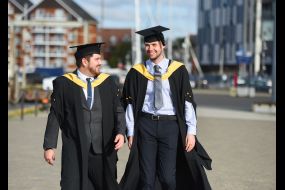 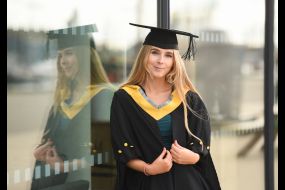 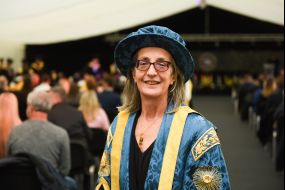 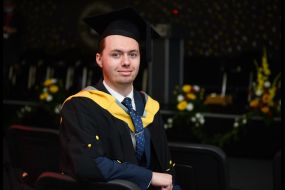