As the Winter Olympics get underway in South Korea, a University of Suffolk student is on track to be one of the country’s most successful winter sports athletes ever.

Following the first main block of World Cup races this season, Telemark skier Jasmin Taylor has finished on the podium 11 times out of 14 races. She has achieved her first World Cup victories in all three disciplines and is now second on the list of ‘most World Cup podiums’ of all time in Great Britain.

Telemark skiing originated in the Norwegian region of Telemark, where in the days before ski lifts, the free heel enabled skiers to climb back up the mountain. In recent years Telemark skiing has been reinvented as a new form of downhill skiing.

Jasmin is just over half way through her degree in Sport and Exercise Science at the University of Suffolk, which she studies part time to fit around her training and competitions across the world.

The 24 year old is thrilled with her recent run of success “I’ve just had the time of my life competing, travelling and skiing - it’s my favourite thing to do and I’m so fortunate to be able to do what I love. Thank you to the University of Suffolk for helping me to make that happen.”

“My lecturers have been very attentive in helping me through my degree. I also appreciate having a different aspect to my life other than skiing. It’s good to have that support from the university as well. It’s nice to have other obligations.”

Among her personal support team is Manos Georgiadis, Course Leader for MSci Sport Psychology, who also lecturers Jasmin as part of her studies. He said, “Jaz represents an exceptional case of an athlete and a role model for many as she is also pursuing a Degree in Sport and Exercise Science. She is a resilient and meticulous learner exploring every opportunity for self-development. I am delighted with her recent competitive successes, which are just an indication of her great potential.  Working with Jaz has always been a pleasure and I am looking forward for more opportunities to celebrate her successes.”

Currently Telemark is not an Olympic discipline. The campaign to have Telemark included in the 2022 Winter Olympics continues and Jasmin said of the Games, “I’m really looking forward to watching the Winter Olympics and following the British success. It would be amazing to be there myself one day.”

Vice-Chancellor at the University, Richard Lister, said, “We are all very proud of Jasmin and her achievements. It is admirable that Jasmin is able to combine such success alongside studying for her degree. We all wish her the very best for the rest of the competitive season.”

The university’s Students’ Union are equally proud of her achievements and are looking forward to welcoming Jasmin back on to campus. Sarah Dooley, Sport Projects Manager, added, “It’s been incredible to follow Jaz’s success so far this season and be able to share that with her fellow students. The Students’ Union is looking forward to seeing more of those podium celebrations before the season closes! Jaz is a fantastic ambassador and inspiration for any current or potential students who want to study and compete at the highest level in their chosen sport.”

Having been part of the international circuit since 2011, Jasmin claimed her first senior World Cup podium in 2013/14 and followed it up in 2014/15 with a bronze in the World Championships, becoming the first Brit to ever medal in the competition.

Jasmin has attracted the attention of the international media and counts former British World Cup alpine ski racer Chemmy Alcott among her supporters.

The next World Cup races that Jasmin will compete in are in Norway in March and the World Cup Finals, which take place in Switzerland later that month. 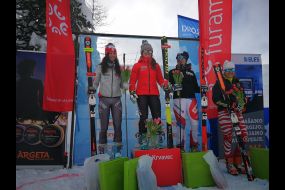 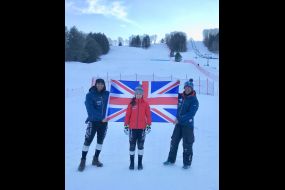