Professor David Gill, Director of Heritage Futures at the University of Suffolk, has published a biography on one of archaeology's most prominent women.

Winifred Lamb: Aegean Prehistorian and Museum Curator documents the life of the pioneering archaeologist in Anatolia and the Aegean. She studied classics at Newnham College, Cambridge, and subsequently served in naval intelligence alongside the Oxford archaeologist J. D. Beazley during the final stages of the First World War. As war drew to a close, Sydney Cockerell, Director of the Fitzwilliam Museum in Cambridge, invited Winifred Lamb to be the honorary keeper of Greek antiquities. Over the next 40 years she created a prehistoric gallery, marking the university’s contribution to excavations in the Aegean, and developed the museum’s holdings of classical bronzes and Athenian figure-decorated pottery.

Winifred Lamb formed a parallel career excavating in the Aegean. She was admitted as a student of the British School at Athens in 1920 and served as assistant director on the Mycenae excavations under Alan Wace and Carl Blegen. After further work at Sparta and on prehistoric mounds in Macedonia, she identified and excavated a major Bronze Age site at Thermi on Lesbos. She conducted a brief excavation on Chios before directing a significant project at Kusura in Turkey. She was recruited for the Turkish language section of the BBC during the Second World War, and after the cessation of hostilities took an active part in the creation of the British Institute of Archaeology at Ankara.

Professor David Gill said, “As we mark 100 years since the end of the First World War, we remember the contribution of women like Winifred Lamb who served in naval intelligence by helping to break enemy signal codes. Lamb’s legacy lives on in the classical displays of the Fitzwilliam Museum, as well as through the British institutes abroad that she supported.” 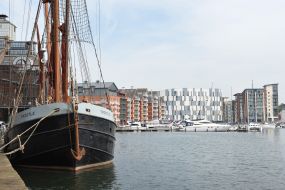