Some of the most vulnerable domestic abuse victims are being forced to stay with their abusers or face homelessness and destitution because they can’t access public funds to flee, according to a new report by the Domestic Abuse Commissioner which draws on new research by the Angelou Centre as well as a review of Home Office evidence by the University of Suffolk.

Nicole Jacobs, the Domestic Abuse Commissioner said “Having spent over 20 years working on the frontline, I have sat with victims and survivors and their children as they desperately seek a place of safety, only to be told that their immigration status means there is nowhere to go. This cannot be allowed to continue”.

Nicole Jacobs is calling on the Government to put victims’ safety ahead of their immigration status.

The ‘Safety Before Status’ Report recognises the term “immigration abuse” which is being used by perpetrators as a way of exerting power and control over their partners and calls for it be included in the national definition of domestic abuse.

Abusers are using victims’ insecure immigration status to coerce and threaten that they will be deported if they go to the police.

“I told him and his family I wanted to leave, and they told me if I did, I would starve because of my immigration status. That I have no rights in the UK. He kept throwing my card [visa] at me and telling me to read what it says at the back, that I can’t get support,” [2] one survivor told researchers.

Perpetrators are also using or destroying immigration documents to control victims, and statutory services often lack the knowledge and skills to support them.

“I had spoken with social services, the police and my doctor and no one had ever questioned his behaviour or thought it was wrong that he kept my immigration papers locked away.”[3]

In the ‘Safety Before Status’ report, Nicole Jacobs, is calling for a raft of changes that she believes would help keep the most vulnerable victims safe.

These include £18.7m to be made available to local authorities in the Autumn Spending Review (tomorrow) over a three-year period so victims can get a bed in a refuge.

She is also urging the Government to set aside a further £262.9m over three years for a dedicated funding pot for specialist ‘by and for’ services including services for Black and minoritized victims. These services are far more likely to have the knowledge and understanding of the issues faced by migrant victims, are more likely to support them, and yet are far less likely to receive statutory funding.

Nicole Jacobs also wants the Government to create an immediate firewall between police and immigration enforcement, accompanied by safe reporting mechanisms and funded referral pathways to support. This firewall should be extended through the Victims Bill to cover all public services.

One organisation told researchers: “We have to tell women who have risked everything and their lives to seek help ‘I’m sorry but we can’t guarantee that your data won’t be shared or that you won’t be deported’. How can we expect any women who are at risk of death to come forward? This is another reason why so many women remain in abuse.”[4]

A significant number of the issues raised in the report were highlighted during the passage of the Domestic Abuse Act but amendments put forward to address them weren’t adopted by the Government. There are also significant concerns that what little support is available might be reduced when the Migrant Victims Pilot comes to an end next year.

The Angelou Centre research highlighted the significant problems faced by migrant survivors as well as the lack of understanding of the issues they face.

Umme Imam, Executive Director of the Angelou Centre said: “This report highlights the level of systemic exclusion black and minoritised migrant victims/survivors experience in both policy and frontline responses to violence against women and girls (VAWG).

“Our research found that services routinely prioritise migrant women’s immigration status over their safety and protection, failing to uphold statutory and international obligations to provide equitable support to all victims/survivors of VAWG.

“The Angelou Centre strongly welcomes the Domestic Abuse Commissioner’s work to highlight this issue and calls on the Government to take action.”

Dr Katherine Allen from the Centre for Abuse Research at the University of Suffolk said: “Safety Before Status sets out a clear evidence base on the experiences of migrant victims and survivors, and how the system is failing them and allowing perpetrators to walk free.

“Our research found that ample evidence already exists on the difficulties facing migrant victims and survivors, and that more can be done now to address them,” Dr Allen added.

The Domestic Abuse Commissioner will conduct a larger piece of research to calculate the total number of victims of domestic abuse with No Recourse to Public Funds, and to better understand the cost benefit of extending existing support to certain groups.

This research will be published next year ahead of the evaluation of the Support for Migrant Victims Pilot, to inform long term Home Office policy solutions for this group.

Ms Jacobs said: “This report represents the starting point for my work in standing up for victims and survivors of domestic abuse with insecure immigration status, and it sets out my ambition as Commissioner to ensure that support and protection is provided to all who need it.” 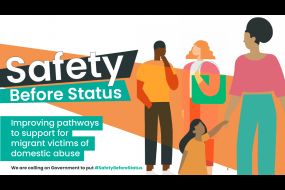