Law students at the University of Suffolk have taken part in a mooting competition whilst studying for their degree.

A moot is a mock appeal court hearing on a point of law. A mooting competition brings together two teams of two students who have a fictional legal problem. The teams spend some preparatory time drafting a skeleton argument and a list of relevant cases which are exchanged with the opposition before the moot occurs. The moot itself takes place in a mock courtroom and each team argues one side of the case before a judge. At the end, the judge delivers their decision on the legal issues, and decides which team wins.

This competition was open to all students on the Law course and was judged by his Honour David Goodin who retired in December after more than 40 years in the legal profession. From 2009 to 2017 he was the resident judge at Ipswich Crown Court.

David Goodin said, “The standard was quite remarkable. I assumed they were all third years, so I was surprised to find they weren’t and even one was a first year. As I said at the time it was well up to the standard of younger members of the junior Bar appearing before me routinely in relatively serious cases. It was clear the students had done their homework, well researched and they were presenting well argued, coherent, persuasive speeches.  It is a very good skill to develop because it concentrates the mind, clarity of thought, the ability to criticise your own case and arguments. It is a very useful skills and probably makes better lawyers.”

Student Alicia Webster, who has just completed her degree, won the competition and said “Originally the competition was daunting especially being in front of a judge however it has helped me beyond belief. It has given me confidence in myself, my work and when speaking in front of people. It has helped my legal research skills as well as my legal arguments. It has made me into the confident law graduate I now am. When I found out I had won I couldn’t believe it. I was so proud and really happy.”

Alicia was presented with a trophy sponsored by the David White Memorial Trust. David White was head of legal services at Suffolk County Council and died in 2011. The Trust supports those wishing to go into the legal profession and has supported the university in the development of the annual mooting competition.

Alicia is now working at Suffolk County Council and will soon join the legal team as a paralegal. Alicia added “Knowing the award is from the David White Memorial Trust makes it extra special to me especially with the link to the Council. It has extra meaning.”

Lecturer in Law, and Head of Mooting Dr Ruth Flaherty, said “I was thrilled by the level of work the students put into the competition.  It was the inaugural event, and there was a high level of research shown on all sides, and the arguments put forward were well thought through.”

“This competition is designed to enhance the abilities of students to undertake their own research, work well as a team, and polish their verbal communication skills.  Due to the online nature of the competition, the students also showed high levels of technological ability to present their arguments, a highly employable skill in the digital market. Alicia gave a particularly strong performance which won on the day, but Aleks and Jordan should also be very proud of the work they put in.”

The University has recently installed a new moot court in its Waterfront Building to give students a realistic setting for court proceedings and it will be the location for future mooting competitions.

David Goodin added “It is very similar to many court rooms I have been in my life. Anyone using this space would have an entirely realistic and authentic feel. It is very impressive.”

To find out about studying Law at the University of Suffolk visit www.uos.ac.uk/law 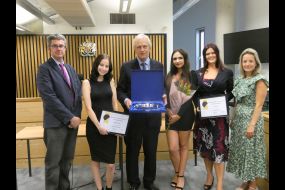 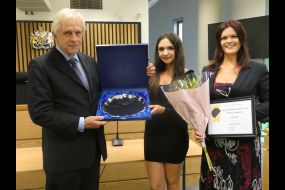 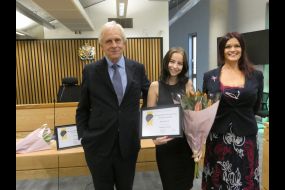