The University of Suffolk will host an exhibition this autumn from one of its alumni.

Credited for being in the top ten of the most influential people in securing the 2012 Olympic Games for London*, Daryl Goodrich will be opening ‘From Suffolk to Sochi...and beyond’ in the University’s Waterfront Gallery in October.

Russell Walker, Senior Lecturer in Graphic Design who taught Daryl, says “Few could have imagined that the17 year old design student at Suffolk College in the early 1980s, would go on to be one the most influential and prolific sports film directors in the world. This is the success story of Daryl Goodrich, a metamorphosis from a determined creative talent of a youth, to the international award winning director that he is today.”

Daryl directed 2012 Olympic Games bid film ‘Sport at Heart’ and ‘Inspiration’. Daryl has worked on the world television feed of the Vancouver 2010 Winter Olympics, having previously worked on a similar role at Athens 2004. He was the film director on Sochi's winning bid for the Winter Games in Russia - and also Qatar's successful campaign for the right to stage the 2022 FIFA World Cup.

Russell adds “The University of Suffolk is proud to welcome back one of its greatest Alumni for a retrospective exhibition of his work. The exhibition documents the transformation from student to budding designer, to the award winner that he is today. A collection of films, storyboard and scripts help to narrate the journey he has been on and the one still to come.”

Daryl will be speaking about his work at the University on 5 October at 2pm. The event is free, however registration for the event is via Eventbrite

Daryl Goodrich - ‘From Suffolk to Sochi...and beyond’ will be in the Waterfront Gallery from 6 October - 9 November 2016 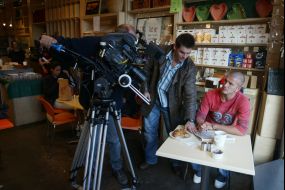